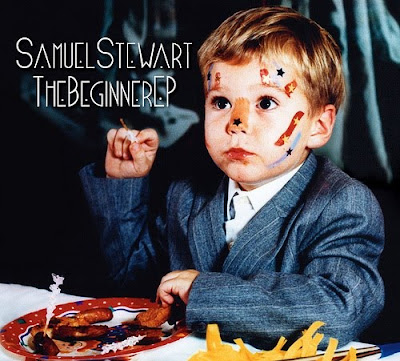 Londoner Samuel Stewart had a brief run as lead singer/guitarist of Blondelle. With a SONY recording contract, Blondelle charted in the Top-10 in Japan and had moderate success across Europe. Stewart has music in his blood, almost literally. His father is Dave Stewart (The Eurythmics, Stewart/Gaskin), and his mother, Siobhan Fahey played with both Shakespeare's Sister and Bananarama. The band released two albums in 2006 and 2007 before falling apart. Stewart relocated to Los Angeles in 2008 where he has been working on his own material as well as producing, notably for his brother Django's band, Django James And his Midnight Squires. Stewart's debut EP, The Beginner, dropped in October of 2009. It will be followed by a second EP as well as a full length album in 2010.

Stewart opens with The Beginner, a wide-ranging and stylistic stream-of-consciousness song that perseverates on purpose, relationships and just about every other possible source of human insecurity. The Beginner is a great tune, keeping the listener a tad off balance with it's lyrical stream and off-beat, dark arrangement. Devil Music is a left-handed celebration of the power of music to motivate us; using the terminology sometimes used by religious conservatives to describe Rock N Roll. Devil Music is highly entertaining and full of a frenetic energy that picks you up and takes you along for the ride. Medicine is a short diatribe on society's reliance on licit and illicit drugs to get through day-to-day life. The song is poignant if allegorical, and follows the transition from prescribing to self-medicating in blunt poetic terms. Capital Of Second Chances touches on the social side effects of gambling and the environment created around places like Las Vegas and Atlantic City. The piano-driven arrangement has a faux-sunny disposition that buoys the song until it runs out of steam, just like the characters portrayed within. Stewart closes with Child Star, something of a musical portrait of a theoretical child actor years after the show has gone out of their business. From a lyrical perspective this is probably the best work on the EP, but the arrangement is my least favorite. Don't get me wrong, it's good, but just doesn't have the same flow as the rest of the EP.

Samuel Stewart benefits from strong bloodlines and good connections, but he rises because he has a fairly original voice as a songwriter and a knack for crafting melodies and arrangements with enough Pop sense to catch your attention and off the beaten track enough to keep it. It's early to say for sure, but don't be surprised if Stewart gives his father a run for the "best songwriter in the family" crown. The Beginner EP is musical and artistic; mildly disturbing and thoroughly fascinating. This is music you don't want to put down.

You can learn more about Samuel Stewart at http://www.samuelstewartmusic.com/ or www.myspace.com/samuelstewartmusic. The Beginner was released in November of 2009. I could find not online outlets for the album, although you can stream tracks on Stewart’s MySpace page.

Samuel Stewarts father Dave Stewart of Eurythmics did not record with Barbara Gaskin. Thats another Dave...:)
Sam Stewart is an amazing new artist, I can't wait for the album!!