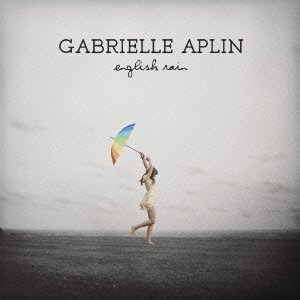 
Gabrielle Aplin’s story of discovery is very familiar.  The Sutton Benger, England native recorded covers of popular songs and published them on YouTube (ala Justin Bieber).  Though still quite young, Aplin impresses with a budding maturity as a songwriter.  With musical tastes honed on the likes of Joni Mitchell and Bob Dylan, Aplin has developed a very personal story-telling style. Aplin’s third EP, English Rain, peaked at #2 in the UK.  This spring she receives her first introduction to U.S. crowds, with dates between now and May 21, 2014 on the West Coast.

English Rain opens with "Panic Cord", a peppy little relationship post-mortem with brilliant folk/pop sensibilities. Aplin's voice has an ethereal quality vaguely reminiscent of Kate Miller-Heidke, and she has a delightfully conversational lyric style that's a perfect complement. Aplin's cover of Joni Mitchell's "A Case Of You" is esoteric and not without charm, but lacks the emotional presence of the original.  "Please Don't Say You Love Me" finds Aplin exploring the early routes of romance with adept musical and lyrical grace. It's a beautiful piece of songwriting likely to kick around your noggin for days.

"Home" is an ode to love and virtual space that two or more people can create with nothing but love.  Aplin's simple guitar-driven arrangement has an incessant quality that highlights the quiet urgency of the song's lyrics.  Aplin dwells on a bout of romantic hero worship with "Salvation", a soaring anthem/ballad with a bridge that's thoroughly out of place. You'll either love or hate this song with little room in between. Aplin departs with "The Power Of Love", a self-indulgent love song that's more obsessed with the concept of love than the thing itself. Aplin sells it with her unusual, lovely voice, but the songwriting here is incredibly young and unpolished, unlike the rest of the EP.

Gabrielle Aplin is still growing into her considerable talents.  On English Rain she shows both her strengths and weaknesses with unabashed confidence, choosing to be herself rather than trying to ply her musical talents to the latest trend.  The effort is laudable, and foreshadows the wonderfully talented and independent artist she is destined to become.  English Rain has its warts; a fact that will seem apropos to anyone who’s ever experienced English rain, but the spots where the sunlight shines through show a tomorrow full of promise.

Learn more at www.gabrielleaplin.co.uk.
Posted by Wildy at 12:57 PM