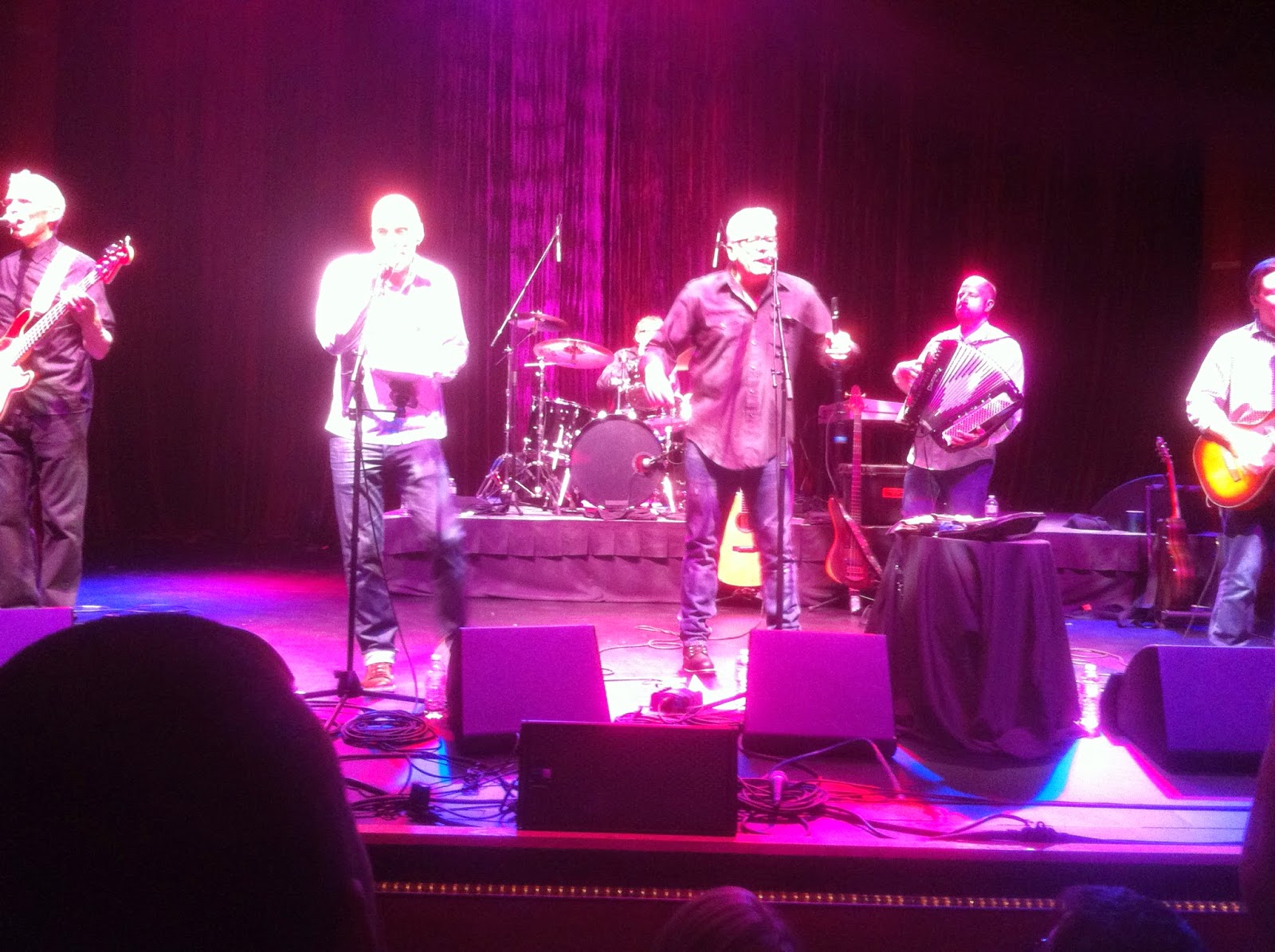 Vancouver rockers Spirit of the West began in 1983 as a trio consisting of John Mann, Geoffrey Kelly and J. Knutson.  The band’s original moniker, Eavesdropper, was quickly retired and Spirit of the West was born.   Originally plying their trade in Celtic and folk styles, the band became a popular draw on folk circuit.  By 1986, Knutson had departed and Hugh McMillan joined the band.  Vince Ditrich came on board in 1991, and Tobin Frank signed in on 1997.  Along the way other members have come and gone, and Spirit of the West has evolved as a band.  After expanding their sound in the early 1990s, SOTW became one of the premier alternative rock acts in Canada.  Spirit of the West continues to tour on a limited basis across Canada.  On Saturday, May 3, 2014, Spirit of the West brought their act to The Bear’s Den at Seneca Niagara Casino in Niagara Falls, NY.  It was a night to remember.

Spirit of the West took the crowd of 400 or so fans on a tour of their storied career across a 90 minute set full of tremendous energy, wit and life.  John Mann sang and danced around the stage like a man of 22 rather than 52, occasionally lapsing into St. Vitus-like gyrations.  Geoffrey Kelly was the warm and witty front man, sharing stories and anecdotes about songs, experiences and life events.  Wrapped in all of this repartee was the music, which was as fresh and lively as it has ever been.  The band opened with “Canadian Skye” before launching into the acerbic “Putting up with the Joneses”.  This latter was brilliantly executed, and had the crowd on the edge of their seats.  John Mann led the audience on a journey through “And If Venice Is Sinking” and “King of Scotland” before Geoffrey Kelly took the mic for “Scotland” and “The Old Sod”.   This last featured an unannounced special guest vocalist whom Kelly later dubbed “Sexy”.  The inebriated 50-something blond sang unintelligibly into the mic throughout the song, much to the amusement of the band.  She was led away after the song by casino staff and hopefully was allowed to sleep it off.

By this point in a show you know if a band is clicking or not.  Spirit of the West was firing on all eight cylinders with horsepower to spare.  Next up was “Political”, a relationship postmortem with an incredibly snappy arrangement.  Among the band’s best-known songs, it found Mann at the top of his vocal game.  “The Rites of Man” was accompanied with a story about its origination, giving the crowd a deeper sense of the song.  It was a touching moment when Mann’s voice rose to the crescendo at the end of the chorus and Kelly joined in on Irish whistle to bring the jig the song was named for to life.

“July” let into “Is This Where I Come In”, which featured some wonderfully jazzy piano work from Tobin Frank.  Kelly touched the crowd with a story about the premature birth of his son Ben Kelly (drummer for Fish and Bird).  This was the preamble to “Goodbye Grace”, a tribute to the hospital and staff who saw the younger Kelly (and his parents) through the first few months of his life.  Once again, the context created a tremendous sense of presence and place.  Pacing through “Wishing Line”, SOTW next launched into the spirited “Morning in the Bath Abbey”.  This one of the band’s most underappreciated gems, and the song came to life on stage.

Spirit of the West closed things out with three of their most well-known songs. “Sadness Grows”, “Save This House” and “Home for a Rest”.  The energy build was tremendous, and by the end the crowd was on its feet and singing along word for word.  The crowd response brought the band for one last go with “The Crawl”.  This was a true sing-along, with the crowd nearly drowning out the band at times.

Spirit of the West was in brilliant form on Saturday night.  Mann and Kelly shared lead vocal duties.  In spite of the passage of thirty years, the vocals were as crisp and clean as they have ever been (even if some of the high notes are a bit more of a challenge these days).  Hugh McMillan provided a lot of musical subtext, playing nearly every string instrument under the sun.  His cool stage persona reminds one of “Shades” from That Thing You Do.  Vince Ditrich has some mad skills on the drums; a fact that isn’t as apparent on the studio recordings as it is on stage.  Tobin Frank added a lot of color to the night on synth and accordion.  Even Matthew Harter, filling in on guitar while John Mann focuses on vocals showed signs of brilliance.  The show was 90 minutes of transcendence; setting clocks back two decades or so while rising above the mere repetition of songs heard many times before.  Spirit of the West played with a singular joy and intensity, and that combination brought the room to life.

In short, Spirit of the West rocked the house.

For those of you who haven't taken in a show at The Bear's Den but live in the Western New York or Southern Ontario regions, make a point of it.  The furthest seat from the stage is 40 feet away, and the U-shaped seating chart offers an intimate concert experience.  The world class sound system and steady stream of world class talent playing the place is a quiet gem sitting on the border between the U.S. and Canada.  And after the show it's just a short walk to the Falls if you're so inclined.