Aaron Comess - Blues For Use 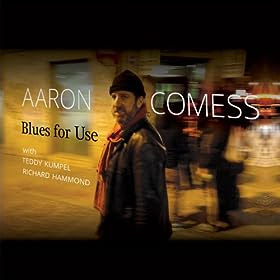 The Band
Aaron Comess came to fame playing drums for the Spin Doctors.  While that wild ride continues, Comess has also made a name for himself from his solo work, which blends rock, pop, jazz and world sounds into his own distinctive sound.  Comess’ most recent work is in collaboration with Teddy Kumpel and Richard Hammond.

The Album
Aaron Comess released his third solo album in May, entitled Blues For Use, consisting of 12 instrumental tracks.

The Buzz
Comess, Kumpel and Hammond are consummate professionals, and the music on Blues For Use is demonstrative of that fact.  The album waxes and wanes from aggressive to pensive.  Comess’ talents as a composer are often overlooked, but he drives the creative process here.

Spotlights
“Hard Ball” focuses on the rhythm section in a percussive arrangement that sounds like an early outtake from Rush crossed with Pink Floyd.  “Guilty Until Proven Innocent” works a long, slow build into a plaintive yet ear-pleasing chorus.  The tight instrumental interplay is key here, with a subtle guitar lead that fluctuates in intensity.  Comess and company engage in a brilliant piece of non-visual art in “Sunrise”.  It’s a lazy, rolling number; the melody is a dog lying in the summer sun, occasionally rolling over to scratch its back in the dirt.  “Bajelirious” plays like an alternate James Bond theme.  The band is at their best here, with all cylinders pumping.

Footlights
There’s little negative to say about the album.  There are slower moments, but they are part of the ebb and flow of the album.  There is definite inspiration here, but it is sometimes of the quieter, pensive kind.  Subtlety abounds.


SoundCloud
Posted by Wildy at 5:57 AM