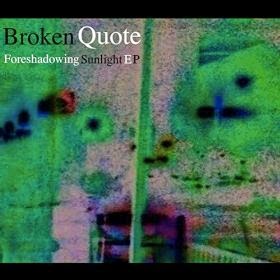 
The Band
Broken Quote is a multi-instrumentalist, writer and producer from Houston, Texas who has been creating music since he was a small child.  A self-taught musician, Broken Quote showed a distinctive ear early on.  While the lack of lessons would be a roadblock to some, it became an open playing field to Broken Quote.  Broken Quote credits influences such as Bjork, Eyedea, Beck, Radiohead, John Cage and Parliament Funkadelic, among others.  His musical milieu continues to grow and evolve, but his current sound is something of a stew of ambient funk, trip hop, electro rock and acid jazz.
The Album
Foreshadowing Sunlight, a five song EP, is Broken Quote’s first release.
The Buzz
Broken Quote is all about minimalist atmospherics.  Electronics and ambient sounds are the core of the sound on Foreshadowing Sunlight, but the focus is less musical than it is of painting collages of sound.
Spotlights
“Late Night Ocean” has an intriguing rhythm and life all its own.  The overall effect is more distracting than cohesive, but there is a musical statement to be made here.  “Glass Ceiling” is similarly unsettling.  Angst-filled piano gives way to a slowly growing cacophony of rhythm, as Broken Quote seeks to unsettle all who would listen.

Footlights
The energy throughout Foreshadowing Sunlight is minimalist by intent, but the effectuation is downright painful at times.  Angst and ennui are the core emotions, and those vibes are imparted to the listener like a cudgel.  Effects very often rule the day, covering the gaps that are left behind by songs that are thought out and through, but often not fully.