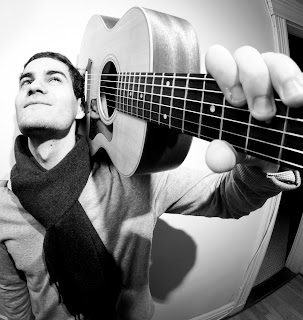 Matt Rod/The Rubix – The Rubix EP
2012, Matt Rod
Matt Rod, AKA The Rubix, is a South African born songwriter and producer now living on the West Coast of the United States.  The Berklee College of Music graduate thinks outside the genre box, recognizing that many people don’t listen to distinct genres or styles of music anymore.  Rod writes to the schizophonic market tastes brought on by the breaking away of the industry from traditional album formats.  This break is readily apparent on Rubix EP, which is really a collection of songs done in collective style.  Matt Rod writes, produces and plays guitar on each track, but he brings in talented musical friends to fill out the sound.
The Rubix’ latest single is “Someone To Hold My Hand”, featuring Mario Jose (Pitch Slapped) on vocals.  The swaying Bossa Nova pop love song is a treat for the ears, and Jose’s voice is smooth like butter.  Matt Rod’s starry-eyed lyrics combine with the rest to make this perfect mix-tape fodder.  “I’m No Lady” is an incredibly catchy dance/pop number that features the killer pipes of Christina Brehm (think Heart’s Ann Wilson as a pop diva and you’ll get the picture).  Also featured is Vice V, about whom we’ll talk more later.  This number will get your feet moving and your heart pumping.  “Days Of Our Youth” features the aforementioned Vice V and his distinctive rhyming style on a catchy, mid-tempo hip-hop vibe with definite flow.  Matt Rod has built a cool yet persistent hook into the arrangement that you simply cannot escape.  The chorus, in particular, will set up shop in your brain for days.
“Like A Record” features the edgy, sexy voice of Hannah Juliano (Pitch Slapped, Delilah, Musae).  This is the darkest piece on the EP, an alterna-pop gem that imprints itself on you immediately.  This is one of those melodies you’ll be humming for days.  If one track from the EP were to be picked for major distribution at commercial radio, this would be it.  That’s not a knock on any of the other songs here, but “Like A Record” has that extra something that marks a hit.

Fans of NBC’s The Sing Off, and in particular of acapella groups Pitched Slapped or Delilah will find a lot to love on The Rubix EP.  Rubix is Matt Rod, as noted above, but it is also the expression of his songwriting by the friends and colleagues he has surrounded himself with. The Rubix has the potential to be a veritable hit machine, attacking radio and sales charts from all angles, directions and genres.  The Rubix EP is a brilliant introduction to a top notch songwriter coming fully into his own in an era where heterogeneity of songwriting styles is welcomed with open arms.  The fact that he has surrounded himself with such brilliant purveyors of his songs is the gravy that makes the meal.
Rating: 5 Stars (Out of 5)
Learn more at www.mattrodmusic.com.