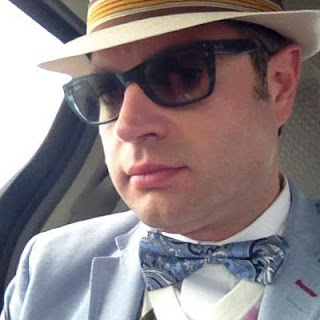 
A band is an organic unit made up of the sum of the members’ talents.  A band losing a primary member is sort of like a person losing a limb; it changes the entire tenor and tone of the band.  Fans of Barenaked Ladies have lamented the loss of Steven Page since he left the band a few years back.  Page has released two solo albums (one while still with BNL), as well as an intriguing collaboration with The Art Of Time Project.  This past Thursday he brought his new band to Canalside in Buffalo, NY.


Page began by alternating songs from his latest album, Page One, with BNL classics.  Opening with “A New Shore”, Page seemingly set the stage for a night of new material.  Early on, he alternated new songs such as “Indecision”, “She’s Trying To Save Me”, “Over Joy”, “Marry Me”, and “Entourage”.  The best performance of the night might have been reserved for Page’s non-album track “A Different Sort Of Solitude”.  This tune is a rocker seriously pop sensibility, and was an incredibly vibrant surprise.


The biggest responses of the night, however, we for BNL classics such as “Jane”, “The Old Apartment”, “What A Good Boy” and “Enid”.  Beginning with “Enid”, Page went on a run of BNL tunes to close out the night.  I caught “Break Your Heart”, “It’s All Been Done” and “Brian Wilson”.  The little ones ran out of gas and so we had to leave, but one more song was forthcoming.  If anyone wants to add a note about that I’d be grateful.


The fact is that Page was engaging on stage, although not as wild and funny as in his BNL days.  Indeed, the suit he wore spoke more of a Vegas style stage show than a rock concert.  Nevertheless, Page used humor and reminiscences of more than 20 years of performances in Buffalo to connect with the crowd.  There’s no doubt that the old BNL material was what the crowd came for, and I have to admit that the songs Page played still sound best in his voice.


The show had two opening acts.  First up was Buffalo’s own Son Of The Sun, whom I’ve written about in the past.  Their set was very solid, and vocalist Zak Ward did an outstanding job of establishing himself in the big open space along the Erie Canal.  The band created a big wall of sound that helped get the early crowd in the mood for the night.


Pittsburgh rockers The Truth had the middle spot, and their set was eye opening.  Performing a mix of covers and original tunes, the band showed off some serious songwriting chops.  Much of their original material was co-written with legendary Nashville songwriter Bernie Nelson, and is very radio friendly with elements of classic rock and country woven throughout.  Co-lead vocalists Paul Michael Benson and Ayesha Scott make for a great vocal mix.  Benson is an accomplished vocalist and front man, but Ayesha Scott lit up the night with a voice that could stop a stampede.  Benson’s presence is key, but Ayesha Scott is a star in waiting.
Posted by Wildy at 7:24 AM