Two Cent Revival - The Devil's In This Whiskey 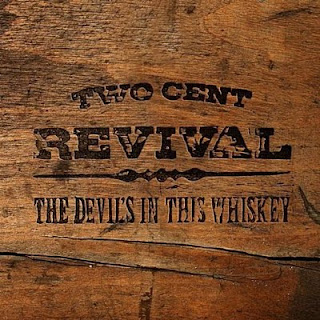 Two Cent Revival - The Devil's In This Whiskey
2011, Two Cent Revival
Brazilian-born, Texas-raised singer/songwriter Matt Jones found love for his Texas roots only after making the move to New York City.  The emotional resonance of being so far from home plays through Two Cent Revival's new EP, The Devil's In This Whiskey, available June 15, 2011.  With a mature writing style born of the desolate honesty of Bob Dylan and Townes Van Zandt, Jones spins tales of emotional darkness and redemption, and the constant pull of both forces on the soul.
The Devil's In This Whiskey opens with "Rear View Mirror", a catchy, id-tempo Americana blend about running away from a past the narrator can't escape.  This anthem of a tortured soul comes with recognition of the trap and in ability to stop running.  Jones sounds a great deal like Paul Gross on vocals, with a steady baritone born of country grit and a touch of folk/rock seer.  "The Devil's In This Whiskey" is a brilliant rune about losing control to the bottle, in spite of having every reason not to.  He's gone to the well one too many times and spoiled the one relationship with any hope of keeping him sane.  Jones begs for mercy, expecting none, in the beginning of a spiral of competing needs.  It's an impressively compelling story-song with many layers.
"Give Me More Time" is catchy number about trying to pick someone up at a bar and being painfully aware of one's own inabilities while trying to make it look good for your friends.  The internal conversation here is well-wrought, reflecting a man who spends too much time thinking and not enough simply doing as insecurities plague his every move.  "Save Our Souls" starts out as a plaintive country/rock ballad, but turns into a Doors-esque epic rocker.  Full of urgency and desperation, this tremendous piece of songwriting shows its progressive rock roots as things swing further and further out of balance.  Two Cent Revival closes with "Back In The Day", a romantic retrospective based in a paucity of emotion.  The narrator isn't certain about happiness, but remembers a time when life was simpler as a bright light.  The solid Americana arrangement lends to the emotionally maudlin tenor of the song.
The songs on The Devil's In This Whiskey are well crafted Americana/country hybrids, but it is the personal story-telling style and pure charisma of Matt Jones that gives Two Cent Revival their wings.  Jones would be equally as compelling alone on stage with a guitar as he is in front of a band, but the full band flavor of the recordings certainly gives additional oomph to Jones' tales of imperfection, pathos and hope.  Two Cent Revival is going to make a lot of new fans with songs like this.
Rating: 3.5 Stars (Out of 5)
Learn more about Two Cent Revival at www.twocentrevival.com or www.myspace.com/twocentrevival.  The Devil's In This Whiskey drops on June 15, 2011.  You can pre-order digital copies from Amazon.com.

Expect wider availability upon release.
Posted by Wildy at 5:00 AM

Fantastic review of a great album. Looking forward to the full length!

MJ - Looking forward to it.

In my opinion one and all should browse on it.