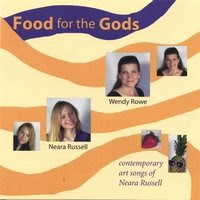 Neara Russell, with Wendy Rowe – Food For The Gods
2006, self-released

Peanut Butter and Cheese are two of my most favorite foods in the world. I could eat either one at most any time of day, but I don’t think I could ever lay a slice of cheese on a peanut butter sandwich. I am using this analogy to describe the sort of conflict I feel about Neara Russell’s debut CD, Food For The Gods.

Let me start with the components, which are wonderful. Neara Russell has composed original songs that cross lines from Chamber Music to New Jazz. Played strictly on piano, they create a mellow but vibrant landscape against which Ms. Russell’s (and even a few of her grandmothers) poems shine. The songwriting (or composition, if you prefer) reflect a maturity and panache far beyond Ms. Russell’s 20 years. There is a tremendous sense of melody, and the piano comes alive to carry the narrative in counterpoint to Wendy Rowe’s magnificent vocals.

Wendy Rowe is a soprano who Wagner himself would have died to have sing his songs. Her voice is angelic, and her interpretations here are beautiful.

Here is where the peanut butter and cheese analogy comes in. The component parts here are breathtaking and beautiful, but when put together, I had a hard time swallowing the finished product. Wendy Rowe’s voice overpowers the music here through much of the recording, making the moving intricacies of the piano disappear. This may just be an issue of the mix/production of the recording, but it did detract somewhat from my enjoyment of the disc.

Nevertheless, it is worth a listen or six. Neara Russell is a multi-faceted artist who also plays rock and roll, and who has displayed undeniable talent here on her debut CD. I will eagerly anticipate future recordings from Ms. Russell, either in the classical or pop/rock genres, because I believe she has a lot to tell us, and a lot of moving music within her to carry her stories aloft.

You can learn more about Neara Russell, and buy a copy of Food For The Gods at www.NearaRussell.com.
Posted by Wildy at 6:18 AM