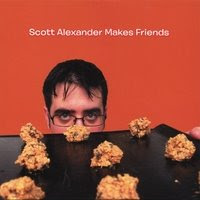 Scott Alexander is a coffee house poet who happens to be a classically trained musician; a talented music educator whose stream-of-consciousness songwriting style disarms the listener with its candor. Mr. Alexander pays homage to the likes of Lou Reed, Billy Bragg and Jonathan Richman as influences, but he also could be described as sort of a punk Garrison Keillor. On Scott Alexander Makes Friends he talk/sings through three songs that at first sound like condemnations of world around him, but end up as condemnations of self.

The key to Scott Alexander is a thriving insecurity that runs through his music and performance art-like self-promotion. A self-deprecating spirit that could be self-destructive is instead used to comment effect to further disarm the listener. It’s not until you’ve listened through the EP a couple of times that you find yourself saying, “Hey, this guy has a lot to say!”

The effect is almost too good. Some will write off Scott Alexander as a quasi-depressed novelty act; He is anything but. While this EP is not enough of Scott Alexander to say you know him, it’s similar to a speed dating encounter, leaving you with just enough to know you’d like to find out a little more.

You can learn more about Scott Alexander at www.scottalexandermusic.com, and you can purchase copies of his EP at www.cdbaby.com/scottalexander2.
Posted by Wildy at 5:49 AM