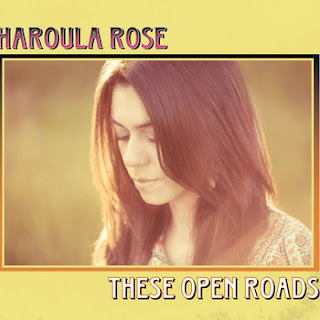 Haroula Rose – These Open Roads
2010, Haroula Rose
Haroula Rose has the sort of voice that stops people on the street.  If you came across her busking on the streets of Los Angeles you’d give up your plans for the day and stand around for as long as she was willing to play.  The singer/songwriter and former Fulbright scholar managed to land a song from her Someday EP  on CBS’ How I Met Your Mother, gaining Rose national attention.  Soon after she was introduced to producer Andy LeMaster (REM, Bright Eyes, Conor Oberst), who agreed to produce her full-length debut album, These Open Roads.
These Opens Roads kicks off with “Brand New Start”, a paean to the need to get out on your own and learn who you are.  It’s a solid bit of songwriting with a positive outlook and an upbeat feel; a good start.  “Love Will Follow” is almost an epilogue to “Brand New Start”; a sweet and well-meant tune that’s a bit on the average side.  Luckily Rose sounds so good on it that she lifts the song above itself.  “Another Breakup Ballad” is plaintive yet mildly catchy.  It’s a relationship retrospective written from a good place down the line; an enjoyable tune that dismisses the pathos of the breakup in favor of clear perspective.  “Duluth” is a story song about a girl in love with a railroad man.  There’s a melancholy resignation to this love song that isn’t sadness, but a reserved hope for a marriage to be.
“Free To Be Me” and “Close My Eyes To See” are both solid entries.  “The Leaving Song” circles back to long distance love.  Written to a beau who is out on the road somewhere, “The Leaving Song” is crafted as country ballad that asks her man to come home because she’s afraid she might stray if he’s gone too long.  “Simple Time” is a wish for old ways.  Rose has a sweet voice, and sounds great here, but it’s almost as if her heart isn’t fully into this moment.  “A Place Under The Sun” is pretty, textured and mildly rhythmic.  It’s a nice touch.  Rose closes with “Lavender Moon” and “The New World”: the first a dark ballad in minor keys; the second a sweet resolution steeped in vocal harmonies.
These Open Roads is a solid entry from Haroula Rose.  The songwriting is good but never really rises above.  Rose herself makes the album with a sweet, pensive voice that will bring you back again and again.  Rose has a low-key delivery style that arguably works well for her.  Still, the energy here is just  a bit light at times.  These Open Roads works well for Rose, but may leave you wondering if there’s another side to Haroula Rose that we’ve yet to see.
Rating: 3 Stars (Out of 5)
Learn more about Haroula Rose at http://www.haroularose.com/ or www.myspace.com/haroularose.  These Open Roads will be independently released on January 18, 2011.  Keep checking Rose’s web pages for additional information.
Posted by Wildy at 6:53 AM

Wow, there is a great deal of useful information in this post!