Scotty Alan - Wreck And The Mess 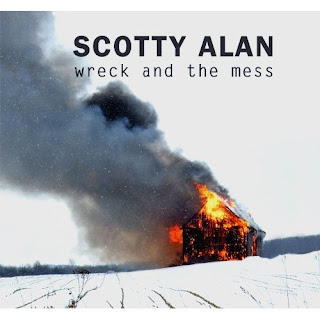 Scotty Alan lives on the south shore of Lake Superior in Michigan, in a log cabin he built himself.  Alan lives very much on his own labors, hunting, fishing and farming.  Living within two-and-a-half miles of the house he grew up in, Alan is part of an extended family.  While his rural existence didn’t expose him to a lot of music over the years, Alan has been making his own since his early teens.  From punk to singer/songwriter, Scotty Alan has always shown a penchant for understanding and commenting on the world around him through song.  Scotty Alan’s latest effort, Wreck And The Mess, finds Alan treading the backwaters of country, Americana and pop.

Wreck And The Mess opens with "Goodbye", a rustic song of parting with a messy, organic feel. Amidst the violin, slide guitar and perfunctory percussion, Alan plies an amiable, off-kilter voice that's part Luther Wright, part Roger Waters and part Mike Scott. "Your Hero?” a swaying little country rocker, has a hypnotic appeal and a chorus that will get caught in your noggin; you'll be singing along by the second time Alan runs through the chorus. "Ain't Much" blends spoken word and sung vocals in any incredibly catchy number built on a minimalist arrangement with its roots in rockabilly. "Barn Dance" has a plaintive, relentless feel; a sense of belonging as palpable as it is ever-present.

"Not Ready To Be" describes a pair of star-crossed lovers in cliché-ridden imagery. In spite of this, there's a stubborn authenticity to the song that demands to be heard. On "Do It Alone", Alan takes a comically DIY perspective on his next great love. The song is incredibly catchy and entertaining; the sort that would play well on a movie soundtrack or on the old Dr. Demento Show. "Was It Ever?" looks back on a relationship in sadness, questioning everything and understanding little. The emotional impact of the tune is striking, especially given the plaintive, almost rock-a-bye feel to the arrangement. Scotty Alan finds a mild Pogues vibe on the country-flavored "So Loud". Starting out as a promising love song, "So Loud" descends into an emotional destruction that seems inevitable even if the song's narrator never saw it coming. The song is catchy, with rudimentary pop hooks that snag your attention and won't let go.

"Dusty Hollow" reflects a seemingly eternal angst born of having better places to go but no motivation to leave a place with little left to offer. The song ends in an almost spoken resolution, but it's not clear whether momentum ever changes in the fatalist-melancholy that pervades. Similarly, "Sinkin' In" wallows in a deepening sorrow over a goodbye that may or may not be final. Alan's arrangement is sorrowful and dark yet retains a distinctive melodicism in spite of its plaintive, dirge-like feel. Wreck And The Mess winds down with the exuberance of "Someone To Fight", driven by a rapid-speak vocal style that's entertaining and raw.

Scotty Alan brings a unique and entertaining charisma to Wreck And A Mess, rough around the edges yet possessing a distinctive, hard-won polish that simply can't be practiced. It can be difficult to stay with Alan through some of his more depressing country numbers, as the mood that pervades often surpasses melancholy quickly on the way down. Yet when Alan is changing up speeds between his darker and light material, and using his not inconsiderable wit to highlight the spaces in between, the results can be very entertaining. Wreck And A Mess is certainly not an album you take lightly, for the darkness of mood here is more than just palpable at times, but Alan has a way of throwing in the occasion backroom anthem with a wink and a nod just to let you know that everything is going to be alright. Maybe.

Learn more about Scotty Alan at www.scottyalan.com or www.myspace.com/oldkilnroad.
Please note that the Amazon.com prices listed above are as of the posting date, and may have changed. Wildy's World is not responsible for price changes instituted by Amazon.com.
Posted by Wildy at 7:05 AM