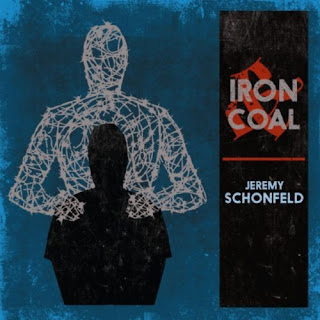 Jeremy Schonfeld – Iron & Coal
2011, Jeremy Schonfeld Music
Growing up in a family of Holocaust survivors, Jeremy Schonfeld has a different perspective on life than many Gen-Xers.  His understanding of the world around him is shaped by the tales of suffering of an entire generation of European Jews at the hands of Nazi Germany.  This darkness has occasionally entered into his songwriting over the years, but Schonfeld has shown a remarkably bright side as well.  His musical Drift (written with Craig Pospisil) had a two-year run at the New York Musical Theater Festival.  He is also a founding composter and lyricists for A-Train Musicals.  Schonfeld’s performance style is enigmatic and powerful, as audiences at such venerated New York venues as Joe’s Pub, Birdland, B.B. King’s, CBGB’s and Lincoln Center have come to know.  Schonfeld’s must recent work, Iron & Coal, is his most personal to date, however.  It is a recast of his father’s memoirs of Auschwitz; a highly personal and powerful story born of his father’s experiences, his own emotions, and that fine line between fact and art that breeds the best of stories.
Schonfeld himself is an enigma.  If Gordon Lightfoot had gone into musical theater instead of folk/rock they’d sound quite similar.  Whatever imperfection you might perceive in Schonfeld’s voice become a part of his larger persona, i.e. Randy Newman or Bob Dylan.  The theatrical flair in his songwriting is also never far from the surface.  Schonfeld knows how to create moments in song.  Opening with “I Gotta Song”, Schonfeld offers up an exultant and beautiful prayer of thanksgiving for “borrowed time”.  The song is in movements like a classical piece, but is a folk/pop/Broadway blend than runs nine minutes without ever feeling tired.  “Story Of Love” is an inspired tune that thrums with Schonfeld’s persona.  This is a true performer’s moment that makes you wish you could take in the song from the third row of a concert hall with the lights low and just Schonfeld and a piano on stage.  “The Mourner’s Kaddish” opens in Hebrew but turns into story-song full of the oft-complicated love of a song for his father.    Love and the drive to differentiate are at war here, but it’s not the sort of battle that does harm to anyone other, perhaps, than the one writing it.  It’s a powerful tune that will cut deep for the male listeners in the audience.
“Dead Beat Heart” finds Schonfeld moving more into a 1980’s rock sound.  Big guitars and even bigger melody are built around a mellow groove for a very enjoyable listening experience.  “Good Stuff” is a rock and roll party song, pure and simple.  Very catchy and danceable, this one is likely to become a guilty pleasure for fans of Kim Mitchell of Cheap Trick.  “Save Me” is an angry and argumentative number that asks for succor but seems to fight it with every note and every word.  Schonfeld uses the percussion here to give the song a deeply unsettled feel – a theatrical contrivance that’s quite effective.  “Yedid Netesh – Good Man” fades quickly into the glam, funk and soul of “Bad Man”.  While the song itself is catchy and entertaining, Schonfeld’s backup singers provide the perfect counterpoint that makes the song fly.
Schonfeld is emotionally lost on “Piece Of Me”, a solid piece of pop/rock songwriting that is sonically pleasing: a high quality album track that holds its place by advancing the story and very quietly holding more of your attention than you might at first expect.  “Nothing Really Matters – Stop, Stop” begins as a musical soliloquy and turns into a frenetic rockers.  This one will get stuck in your head with its manic feel.  “If Ever” opens with an intriguing pizzicato string arrangement and turns into one of the best non-traditional ballads to come out of 2011.  Don’t be surprised if this song gets covered many times over down the road.  “Time”, the penultimate track on the album, advances the story, but feels like its simply holding place.  This isn’t inappropriate in the story line, but it is something of a pause musically that’s simultaneously distracting and possibly necessary to the story line.  Schonfeld brings down the curtain with “Yet”, a song of self-conviction about moving forward and remember that things will somehow be okay.  It’s a quietly powerful moment that explores the resilience of human heart in the wake of inescapable tragedy, wrapped up in a stunning arrangement that’s perfect for the Broadway stage, but easily transmutable to the pop/rock/folk world.
Jeremy Schonfeld lives on the edge of death for much of Iron & Coal, but like his protagonist he truly lives.  The fact that the lines at times become blurred between protagonist and story-teller only makes the story more powerful.  Schonfeld’s compositions are golden – everything flows as if time itself were the driver.  You could easily imagine this cycle being reworked into a show, although it perhaps flows best as it is.  A successful musical presentation would force too many changes, but as a single work of art, Iron & Coal is a thing of beauty.
Rating: 4.5 Stars (Out of 5)
Learn more about www.jeremyschonfeld.com or www.facebook.com/jeremyschonfeldmusic.
Posted by Wildy at 12:06 AM