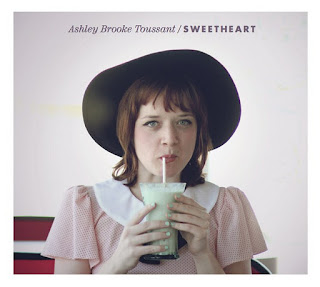 Kent, Ohio's Ashley Brooke Toussant is a modern singer/songwriter with a deep love and respect for old-time sounds and genres. Moving to Chicago and back over the last few years, Toussant has continued to explore his musical gifts while amassing a number of songs. These creations come to life on Sweetheart, the follow-up to the 2008 EP, All Songs In English. This time out, Toussant's work has more of a country feel, but the singer/songwriter pastiche has not been forgotten.

Toussant has an unusual voice; almost a bit uncomfortable at first, but she grows on you. Imagine Jewel with Dolly Parton's vibrato and you're getting close. Distinctive enough to stick with you, and after an initial adjustment, really quite appealing. The songwriting on Sweetheart is anything but uneven; in fact, it's perhaps too consistent to really maintain listeners' attention. Toussant starts off well on the title track. "Sweetheart" shows Toussant's voice at its sweetest and most supple in a folksy country number reminiscent of early Jewel. "Without Feathers" is full of unusual and striking imagery, promising, perhaps, great an unusual things to come. Unfortunately, the suggested greatness never quite materializes.

Toussant settles in for a consistent run through songs full of love and melancholy, all played against the backdrop of country-ized folk/pop arrangements. The songs are solidly written and performed, but there's a general lack of dynamic here that's suggested by the two opening tracks. Toussant may remind listeners more of Cowboy Junkies during their popular phase; boxed into a sound that is appealing on some level, but suffers from a lack of contrast, and thereby losing the subtle nuance and detail for lack of aural backlighting. Toussant does surprise us in the end with a well-thought cover of Henry Mancini's "The Sweetheart Tree", but unfortunately some listeners may have tuned out by then.

Ashley Brooke Toussant is a talented singer/songwriter with a distinctive sound. In spite of the initial displacement at her sound, Toussant's inherent sweetness of sound will draw you in. Sweetheart is well-intended, but the lack of real stylistic or sonic variation, outside of the first two tracks, dooms the album to background listening. It's a shame, because Toussant and her band employ intriguing imagery in her lyrics, and some wonderfully subtle, reverb-washed instrumental work in support. But the lack of dynamic variation may cause these subtle details to become lost in the wash.