The Jekylls - The Sweet Factory 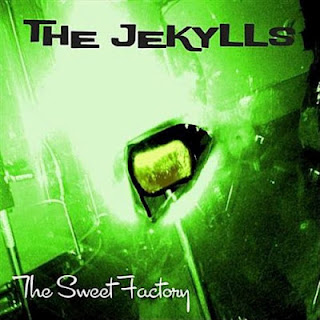 The Jekylls – Sweet Factory
2012, The Jekylls
The Jekylls are a Colorado super group, comprised of members of Colorado stalwarts The Hollyfelds, the Railbenders and Sunday Girl.  1960’s pop is the glue that holds the Jekylls together on their debut album, Sweet Factory, due out April 20, 2012.
Sweet Factory is a treat for the ears.  Kicking off with "I Think I Thought”, The Jekylls set the tone early with a catchy early rocker with a Lo-Fi/Hi-Fi feel.  The retro glaze can’t hide the flat out quality of the musicianship in the band.  And as vocalists go, if you were ever to draft a fantasy band, Eryn Hoerig would be an automatic first round pick.  “Goodbye” is a catchy, old-school kiss off song with country somewhere in its roots.  None of the modern effluvium of country radio here, but just a good, old fashioned 'get lost' set to song.
“Tomorrow” and “Where You Were” are solid entries that show off the all-around talent of the ensemble, and “Your Walking Papers” goes at the kiss off from a slightly different direction.  This is the sort of number that gets the jilted patrons in a bar to sing along at the top of their longs, screaming the kiss-off lines and high-fiving each other.  It’s also highly danceable, so even the rest of you might have a hard time not joining in.
Hoerig and company get to show off their melancholy side in a superbly arranged number that’s almost magical in how it flows.  Not ones to slow down for long, The Jekylls respond by ramping up into the rambunctious “You’re Probably Right”, with Tony Asnicar dropping his snappiest guitar work of the album, and Eryn Hoerig committing to the melody like a vocal vixen.  The sultry and sly feel isn’t confined to the vocal line, however, as the rest of the Jekylls wrap around the melody in a musical love fest you don’t want to miss.  Having hit the apex here, the Jekylls close out on solid notes with “These Long Weeks”, “Lose It All” and “What I Want”.
The Sweet Factory is a deceptive album.  The Jekylls are so packed with star-quality writers and performers that it’s easy to become complacent as a listener.  The true standout material on the album can’t be ignored, but the quality of their work is so consistent that the casual listener might find a truly well-crafted number to be something of a letdown next to songs like “You’re Probably Right” or “Goodbye”.  While The Jekylls have years of collective experience, they are still somewhat young as bands go (formed in the summer of 2011), and so the cohesion of sound you might expect to find across the album as a whole isn’t quite there.  Nevertheless, this is an extraordinary debut album that’s going to have a hard time staying regional.
Rating:  4 Stars (Out of 5)
Learn more about The Jekylls at www.thejekylls.com or www.facebook.com/thejekylls.    The Sweet Factory drops on April 20, 2012.  You can pre-order the download through the Wildy’s World Amazon store, or from e-tailers below.  Keep your eyes open for wider availability, and additional formats, as the release date draws closer.

Please note that the Amazon.com prices listed above are as of the posting date, and may have changed. Wildy's World is not responsible for price changes instituted by Amazon.com.
Posted by Wildy at 6:46 AM

Labels: Sunday Girl, The Hollyfelds, The Jekylls, The Railbenders