Lauren Edman - It's Always The Quiet One 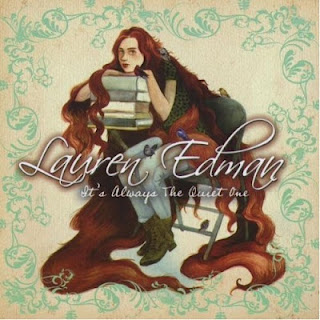 Lauren Edman – It’s Always The Quiet One
2012, Lauren Edman
At first listen, Lauren Edman’s It’s Always The Quiet One might seem like a musical autobiography that’s full of contradictions.  It that’s your first impression you might want to listen again.  In a world full of superficial pop music, Edman digs deep.  Exploring the worlds perceptions of a ‘quiet person’ in direct contrast to her sense of self, Edman gets deep into her own psyche while navigating the musical pathways between trip-hop and shoegaze.  Sparse, ethereal arrangements both frame the songs and leave Edman’s voice and presence exposed to the world.  It is a brave artistic effort that succeeds on chutzpah and musicality.
Edman has a sweet, plaintive voice with just a hint of edge to it; the high school wall flower that finally speaks during graduation week and makes everyone uncomfortable with how much she’s been paying attention all these years.  Edman’s focus is turned inward on It’s Always The Quiet One, however, examining her own emotions, motives and insecurities.  On “Wasting”, E      dman explores self-doubt in the context of gorgeous ambience.  The vocal harmonies she builds around herself have to be heard to be fully appreciated.   “Slate” sets up an interesting juxtaposition between the arrangement and Edman’s voice.  The almost clockwork piano style nearly sounds programmed, whereas Edman’s voice is passive and sweet.  The theatrical sense here is compelling, as an implication of events out of her control wash by Edmans in her ‘quiet’ state.
“Be The Light” explores the mindset of a loner who knows how to break free but stays confined to their own inner restrictions.  This is a through the looking glass moment, standing on the precipice of setting oneself free while negotiating the inherent discomforts.  This struggle resolves in “Sweet Girl”, with Edman breaking out of her shell.  There’s an almost apologist air to this, but only for the discomfort she’s caused others.  It’s very clear that the quiet girl is here to stay.  The energy in this song changes as well, an uptick from the quiet aesthetics that span much of It’s Always The Quiet One.  Edman doesn’t so much get louder as she injects more energy into her electronic muse, achieving a sense of dynamic that is too often missing from electronic pop.
Perhaps the big struggle on It’s Always The Quiet One is that the album climaxes too early.  “Sweet Girl” is a being is becoming moment.  In a movie, you would expect such a character breakthrough to lead to the realization of a goal, dream, etc.  There would be some sort of payoff for the main character or narrator.  That payoff never comes on It’s Always The Quiet One.  Edman offers up a series of musical doodles that are more afterthought that aftershock.  “Red Wings”, “Desperate Times” and “Silent” simply slide by the listener.  Edman shows signs of life on “This Is It”, but they are mere sonic echoes.  “She’s Not Here” is an attempt to celebrate the rite of passage that has occurred in “Sweet Girl”, but it is too far disconnected by time and musical experience to have the impact it might have otherwise.
In spite of all of this, there really isn’t a weak song on It’s Always The Quiet One.  It’s simply that Edman starts out with a quietly theatrical sense and the feel of a story in development, but then drops listeners half way through for a series of scattered sidebar illuminations that don’t resonate with the progression she starts with.  It’s clear that Lauren Edman has a talent for building sonically pleasing songs from the electronic ether, and her voice is sweet, but with just enough of an edge to keep it interesting.  There is a talent, however, to building an album that involves more than simply writing songs, but the ability to put them together in a way that flows and makes sense.  Edman loses that sense part way through It’s Always A Quiet One.  It’s not a fatal error, but it does make the listening experience a bit disjointed.
Rating: 3 Stars (Out of 5)
Learn more about Lauren Edman at www.laurenedman.com.  It's Always The Quiet One is available from the e-tailers below, as well as through the Wildy's World Amazon.com store.

Please note that the Amazon.com prices listed above are as of the posting date, and may have changed. Wildy's World is not responsible for price changes instituted by Amazon.com.
Posted by Wildy at 6:45 AM