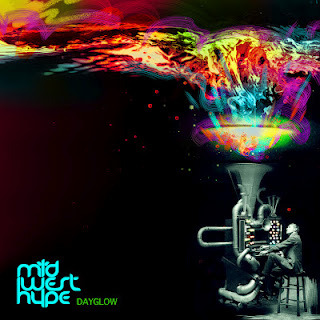 Midwest Hype – Dayglow
2012, Midwest Hype
It’s been nearly ten years since the seeds of Midwest Hype first sprouted.  Singer/guitarist George Matthew Prellowitz met drummer Max Kepler and bassist Nate Miller and the three began jamming together.  Moving on the Ball State University together, they later added Kevin Krismanich (keys), Ben Morrisey (sax) and Scott Whitford (trumpet).  The band’s eclectic mix of hip-hop, reggae, funk and jazz have made them a local Indie favorite in Chicago, and with the addition of MC Justin “Ideal” Diehl in 2010, Midwest Hype seems as if they have finally come of age.  Their latest release, the Steven Gillis (Filter) produced Dayglow, plays on the band’s strength and musical diversity to create a true listening experience.
Dayglow kicks off with the wonderfully flowing mish-mash of “Behind Our Eyes”, vacillating between ska-tinged pop and rap.  The song is all about making the most of the day but never losing hope over chances missed.  The horn section helps to fill out the sound and make it all flow together.  “Elastic Booty Shorts” is all about having a good time and enjoying the moment.  With rap verses and a spoken/song chorus, this song has all sorts of commercial appeal given current musical mores.  “All Is Water” digs in with a sophisticated island groove blended with a pop-ballad sensibility.  In another era this would be top-40 gold; as it is expect this to be a concert favorite for the band (lighters and cell phones).
Midwest Hype gets a generic reggae groove on for what turns out to be a middle of the road pop ballad.  The instrumentation here is complex and enjoyable, but the song itself just never quite takes off.  Things get a bit edgier on the motivated and energetic “Do Or Die”.  Everything falls into place for Midwest Hype on this number, an eminently catchy and danceable number that plasters itself to the inside of your skull and declares residency the first time you hear it.  Dayglow closes on a full-on reggae groove in the form of “People Of America”, a celebration of our ability to make the most of our own world.  “People Of America” takes the current mood of national pessimism and turns it around, putting the responsibility for tomorrow where it has always been, in our own hands.  Along the way, Midwest Hype pays tribute to Bob Marley’s “Don’t Give Up The Fight” with a four-line melody snippet that recurs as the primary theme.

Midwest Hype isn’t all hype on Dayglow, seamlessly blending rap, reggae, jazz, pop and R&B into a multi-rhythmic confection that just might turn out to be pop gold.  There have been bands before Midwest Hype who have tried to bring all of these sounds together, but it would be hard to find one who has done it better.  The ideas behind Dayglow are positive, idealistic and full of the energy of youth.  Folks over thirty or gone cynical might have a hard time digging the lyrical wash that Midwest Hype creates.  Anyone still seeing the world through rosy lenses will dig Dayglow hard.  Anyone who has moved on will be reminded of what the world looked like when they were young.
Rating: 4 Stars (Out of 5)

hell yeah. though i disagree about runaway; i find it to be quite a lovely track. the bridge gets me every time. preach it