Amy Dalley - Coming Out Of The Pain 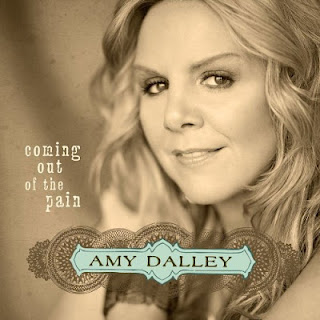 Amy Dalley – Coming Out Of The Pain
2012, Rock Ridge Music
Country/rock singer-songwriter Amy Dalley has taken a long and winding road to become the artist she is today.  Growing up in Kingsport, Tennessee, Dalley was performing from a very young age.  Her first professional gig was at Dollywood.  Moving to Nashville in 1994, Dalley formed the Hillbilly Gypsies and scored a publishing deal.  This led to one of her songs, “Dream To Small being featured on the taste-making teen drama Dawson’s Creek.  Dalley was then picked up by Curb Records, releasing seven successful singles between 2003 and 2007.  During that time she co-wrote a successful single for Reba McEntire (“My Sister”) and recorded her debut album.  For one reason or another, Curb never released Dalley’s album.  Dalley struck out on her own, releasing It’s Time on her own Madjack Records in 2009.  This album became quite popular through grassroots efforts and word of mouth.

Kicking things off with the gritty country/pop of “Peace Sign”,  Dalley delivers a brilliant and funny kiss odd song.  This is a sure-fire hit, as they say.  The song is catchy, well-written and seriously entertaining.  Dalley’s iron & wine voice is the main attraction however.  “Breakin ‘ It Down” is more of a classic rock number, think Heart with a country vocalist and you’ll have the right idea.  “Somebody Said It Rained” is a generic country ballad that’s made much more interesting by Dalley’s voice.  Dalley slips a bit into cliché on “Saturday Night Situation”, but that’s sort of the point.  This raucous country rocker is catchy as anything you’ll hear on commercial country radio, and will make programmers drool at the number of spins it might garner.

“Damage Done” is one of the more finely written songs on the album.  The melody could stand alone if it needed to, but Dalley wraps it in complementary instrumentation and delivers it with a warm, tough tone that gets the job done.  The album slips into generic sentimentality on “I May Love You Now”, a regretful ballad without much energy.  Dalley picks up the pieces for “Civil War”, an exploration of how a relationship fell apart.  The full arrangement seems to reflect the complication emotions and full on rush of finding the source of a problem in the middle of a storm.  The song is artfully written and brought to life by Dalley and her band.

“Round And Round” allows a listener a moments respite before Dalley launches into the upbeat pop of “Bottle It Up”.  Try to get this tune out of your head.  Just try it.  Don’t be surprised if you hear “Bottle It Up” once an hour an hour on commercial country radio this summer.  The song has an infectious feel to it that will wrap you up.  Dalley closes out with the title track.  “Coming Out Of The Pain” is solid radio fare, lending itself more to rock n roll than to country.  The song is well written and ready for the mass market, but may have a hard time slotting neatly into one niche.

Amy Dalley shows that she can deliver the hits on Coming Out Of The Pain, but occasionally she also reaches into the well and writes something deeper and more musically profound.  Coming Out Of The Pain is a classic case of an artist trying to balance commercial success with continued growth as an artist.  So far, Dalley is handling the balancing act very well.

Learn more about Amy Dalley at www.amydalley.com.  Coming Out Of The Pain drops this week.  You can order it any of the e-tailers below, or through the Wildy’s World Amazon store.


Please note that the Amazon.com prices listed above are as of the posting date, and may have changed. Wildy's World is not responsible for price changes instituted by Amazon.com.
Posted by Wildy at 7:47 AM