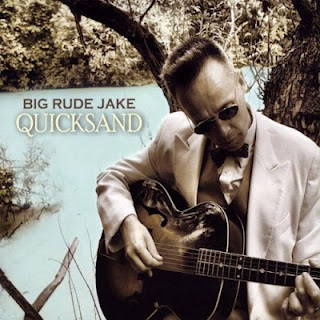 Big Rude Jake – Quicksand
2009, Big Rude Jake
Look up the phrase “hep cat” in the dictionary and you’re likely to find a picture of Big Rude Jake.    His capricious blend of jump jazz, blues, ragtime, folk and punk is as unique as his stage persona.  Coming to prominence in the early 1990’s in the then burgeoning Toronto indie scene, Big Rude Jake has always been an enigmatic anti-rock star.  After two albums with Big Rude Jake and His Gentlemen Players, Jake left Toronto for Brooklyn and signed with Roadrunner records.  This partnership led to the release of a self-titled album that has become Jake’s most sought-after release.  After being hit by a taxi in 2002, Big Rude Jake dropped out of sight for a while, but even through the long healing process he never stopped writing.  He began performing publicly again in 2006.  Getting back to his musical roots, Big Rude Jake took some time to put together his fifth album, Quicksand.  Quieter and more nuanced than his previous work, Quicksand still manages to maintain the punk attitude and inherent musicality that have always been Big Rude Jake’s trademarks.
Quicksand opens with “Your Heart Belongs To You”, with Big Rude Jake sounding like a 1930’s nightclub singer.  Jake’s singular guitar style stands out as distinctly as his rough and tumble voice.  “Road Outta Hell (Blues Mix)” is a stripped down and dark blues number.  The stripped down arrangement is the perfect complement to Jake’s vocal line.  “Wild One Come By Me” is a solid anti-ballad that’s all Big Rude Jake, even if you could hear a bit of a Neil Young tribute here if you were so inclined.  “Moses Heard The Calling” is performed in a classic call-and-response, southern gospel style.  This is a wow moment for Big Rude Jake, very catchy and full of energy in spite of the stripped down, sparse arrangement.
“Stealin’ Away” is a bit reminiscent of another Big Rude Jake tune, “Speakeasy”.  Pay special attention to the piano work here.  Jake does one of his trademark voiceovers on “Good Morning Jazz Man!”  While always entertaining, here it actually distracts from the quality of musicianship and a sharp jazz arrangement.  “Preacher’s Got A Brother” plays on the transference that can happen between a shepherd and the ladies in his flock, and the mischief an ill-intended twin brother can play in the process.  It’s a highly entertaining musical turn full of innuendo and rhyme – Jake at his finest.
“Walkin’ In Quicksand” has a quintessential feel about it.  Big Rude Jake is very much in his element here and feeling at home.  Things take an interesting turn on “The Last” however.  Based on a desolate and mad (crazy) waltz, the song is a tremendous contrast to what has come before, and Jake gives his finest vocal performance of the album.  “The Jelly Song (Stompin’ Mix) is an entertaining number about the juxtaposition of food and sex.  Innuendo flies free in this enjoyable little romp.
Big Rude Jake gets righteous with “Where Shall We Behold The Kingdom”.  This time it’s just Jake, his guitar and a metronome, getting personal with a full on gospel feel.  The melody is gorgeous, and the complementary guitar arrangement is pitch perfect.  Jake strips down “Road Outta Hell” and “Stealin’ Away” before exiting stage right.  “Road Outta Hell” is a solid re-take, but “Stealin’ Away (7th Story Balcony Mix)” brings out a deliciously folksy blues feel that is irresistible.
Like a fine wine or aged Bourbon, Big Rude Jake just gets better with time.  Eclectic?  Hell yes.  Original?  Even more so.  In his punk cabaret days, it would have been easier to overlook the talent of Big Rude Jake in light of the spectacle and energy of his live shows, but Big Rude Jake has come fully into his own.  Outstanding songwriting, sublime musicianship, and the sort of force majeure personality it takes to be a star are all elements of Quicksand.  The album is full of difficult musical choices, and Big Rude Jake and his band nail almost every one.  Jazz, blues rockabilly, punk and gospel all come together (sometimes in the same song) in ways you can’t imagine on Quicksand.  Lucky for us, Big Rude Jake could imagine it, and make it happen.
Rating: 4.5 Stars (Out of 5)
Learn more about Big Rude Jake at www.bigrudejake.ca.  You can purchase Quicksand through Big Rude Jake’ website, from the e-tailers below, or through the Wildy’s World Amazon.com store.
CD               Amazom MP3            iTunes