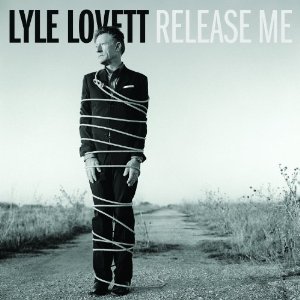 Lyle Lovett – Release Me
2012, Lost Highway
In modern American music there are few singer/songwriter/musicians in a class with Lyle Lovett.  A jack-of-all trades musically, Lovett’s muse runs through the fertile grounds of rock, country, blues, gospel, jazz, bluegrass and folk, sometimes all within one song.  The four time GRAMMY award winner has had his share of chart success, but if you look at the list of people he’s collaborated with over the years you’ll have an idea of the sort of respect he has from his peers.  Names such as Randy Newman, Keb ‘Mo and Allison Krauss are but a few of the folks Lovett has worked with over the years.  This week Lovett released his 15th album, Release Me, and continues to show why he is one of the finest working songwriters in the U.S., as well as one of the most nuanced interpreters or classic country music as well as standards.
Lovett kicks things off with delicious bluegrass instrumental ‘Garfield’s Blackberry Blossom”, showing off not only his chops a musician but also the deep talent of his backing band.   Lovett has never been afraid of letting his backing band shine for their own individual and collective talents.  “Release Me”, featuring K.D. Lang in a duet, will bend your ears a bit at first, but once you get accustomed to the harmonic scheme of the song you’ll never want to hear it any other way.  “White Boy Lost In The Blues” is a catchy, blues-tinged early rock n roll style number that you won’t be able to get out of your head.  The eminently listenable Kat Edmonson joins Lovett for a sparkling rendition of “Baby Its Cold Outside”.  The chemistry and blending of voices here is striking in intensity even amidst the tongue-in-cheek playfulness of the track.
“Understand You” is a moment of pure brilliance.  Lovett has a distinctive talent for translating these quiet, nuanced ballads and creating moments that transcend both music and the human heart.  “Brown Eyed Handsome Man” blends country, blues and rock in a somewhat mysterious take on the classic Chuck Berry-penned tune.  “Keep It Clean” is a wonderfully entertaining bit of ragtime country that will get stuck in your head and stay there.  “One Way Gal” is a working class paean to a good woman.  Lovett imbues this song with wonderful energy, driven by a guitar part that simply will not quit.  “Dress Of Laces” is a classic murder ballad with a twist; written by Saylor White and originally performed by Nanci Griffith.  Lovett breathes new life into a classic, if underappreciated song with a performance you won’t soon forget.
“The Girl With The Holiday Smile”, one of two Lovett originals, is a swinging country number that combines prostitution with the holiday season in entertaining fashion.  This is classic Lovett; well-written and musically superb, with that wonderfully warped wit of his in full effect.  The other original, “Night’s Lullaby” is an amazing country ballad; one that seemingly stops time while it unfurls.  “White Freightliner Blues”, on the other hand is raucous and fun – an instant party.  Lovett’s band is at the very top of their collective game here.  If you can sit/stand still through this number you’d better have someone check your pulse.
“Keep Us Steadfast” is a country/gospel hymn written in mixolydian style.  Lovett’s plaintive vocal line is perfect against the stripped-down beauty of the guitar-driven arrangement.  Kat Edmonson returns for “Christmas Time Is Here”, a quiet calm before the tempest of closing number. “Isn’t That So” finds Lovett up to his old tricks, creating a wonderfully blues-tinged country/pop take that is sure to become a fan favorite.
Release Me is one of those albums it takes a few listens to really dig into, but the time and effort are worthwhile.  Lyle Lovett is a consummate professional as a songwriter and performer, and Release Me is evidence of an artist who is thoroughly in his element.  While the album might run a bit short on original tunes, it once again shows that when it comes to interpreting and performing songs from the American songbook, there are those in the field with similar talents, but nobody puts it all together the way Lyle Lovett does.  Release Me is utterly brilliant.
Rating: 5 Stars (Out of 5)
Learn more about Lyle Lovett at www.lylelovett.com.  You can purchase Release Me there, or through the links below.