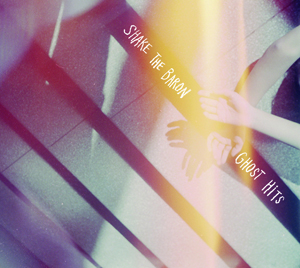 Shake The Baron  - Ghost Hits
2012, Super Duper Records
New York Rockers Shake The Baron go for a neo-British sounding new wave/shoe gaze menagerie on their second album Ghost Hits.  Vocalist Andrew Oedel is appealing, with a voice that’s scratchy and accessible, yet with a purity of tone that is surprising.  Shake The Baron plays with a rhythmic, guitar-driven style that’s easy on the ears.  The songwriting on Ghost Hits is poetically solid, but delves too deeply into the broken psyche of a simpering, perseverating heart.
While tunes such as “Jones”, “Let’s Go Underground” and “We Made A Habit” show signs of real life, Shake The Baron is too often caught asunder by a whirling storm of self-pity and regret.  The inward focus here is just too much, and while broken hearts have driven rock and roll since Les Paul struck the first electric chord, here it becomes a real drag on the music.  Shake The Baron shows real potential on Ghost Hits, but never manages to break out of their own doldrums here.
Rating: 2.5 Stars (Out of 5)
Ghost Hits drops on June 12, 2012.  Learn more at www.shakethebaron.com.

Please note that the Amazon.com prices listed above are as of the posting date, and may have changed. Wildy's World is not responsible for price changes instituted by Amazon.com.
Posted by Wildy at 7:23 AM