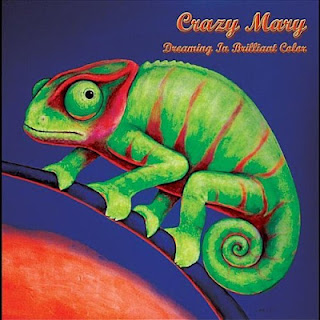 Crazy Mary – Dreaming In Brilliant Color
2012, Humsting Records
The 1970’s and early 80’s were a crazy, brilliant, dangerous time in New York City: Prostitutes on 42nd Street, muggings all over town, and some of the smartest, hippest music anywhere.  Much of that city is gone, but Crazy Mary is keeping some of that gritty spirit alive.  On their ninth album, Dreaming In Brilliant Color, Crazy Mary shows off the sort of whip-smart swagger that once made rock and roll so much fun.
Crazy Mary kicks things off with the high energy rocker “Come On Let’s Go”.  Vocalist Em Z is the primary driver here, as the arrangement underneath is decidedly low key.  It’s cult of personality time as Michelle Malone meets Geddy Lee in one of the more memorable vocal performances of the year thus far.  The chorus is crazy infectious, and the unpredictable violin soli is the perfect spice.  “Cup Of Tea” is a catchy little number, although Em Z seems a bit out of synch with the band this time through.  “Driven As A Train” has a theatrical bent that is hard to ignore, and gets stuck in your medulla, making it next to impossible not to move around and shake your limbs.
“Song For A New Year” finds Crazy Mary wanting to capitalize on the political ideals of the ‘occupy’ movement, but the emphasis on the political isn’t matched by the energy, and this tune fizzles before it can set sail.  “Ferris Wheel” finds Crazy Mary getting more into a country/Americana groove where they sound most at home.  “I’m Ready To Go” recaptures the energy the band is capable of, and promises much for Crazy Mary’s live shows.
Crazy Mary takes a blind turn on “Fallen Angel”, falling nicely into a blues/rock arrangement that’s down and dirty yet refined.  The energy here is ebullient, and Crazy Mary sounds like they are having a blast.  Listeners won’t be able to help from picking up on, and feeding off of that energy.  The live wire feel stays for “Nick’s New Groove”, even if the composition is a bit rough around the edges.  The seams never quite come apart as Crazy Mary tries to expand their musical field of play, but the edge of your seat drama over when it all might come apart is a fun musical sidebar.
Dreaming In Brilliant Color goes quietly thereafter, with Crazy Mary working through “Another One Like You”, “Take Me By The Hand” and “The Big F” in mercurial fashion.  “The Big F” is a funky monster that never takes off the way it might.  One gets the feeling this tune will play better against the energy of a live audience than it does in the quietude of the studio.
Don’t look now but Crazy Mary is in the neighborhood.  In spite of some slow moments on Dreaming In Brilliant Color, Crazy Mary shows themselves to be accomplished performers and musicians, and Em Z has the sort of voice that’s instantly recognizable once you’ve heard it.  There’s real potential here.  In another era Crazy Mary would have a major label contract and a defined development path.  Left to their own devices it seems likely Crazy Mary will still make it to the larger stage; it might just take a bit longer.
Rating: 3.5 Stars (Out of 5)
Learn more about Crazy Mary at www.crazymary.com.  You can purchase Dreaming In Brilliant Colour from the etailers below.


Please note that the Amazon.com prices listed above are as of the posting date, and may have changed. Wildy's World is not responsible for price changes instituted by Amazon.com.
Posted by Wildy at 7:14 AM

This is Shannon from the Cyber PR® Team, and I just wanted to thank you for supporting Crazy Mary!