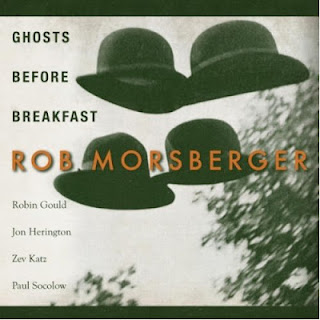 Rob Morsberger  - Ghosts Before Breakfast
2011, Hieroglyph Records
Rob Morsberger has always had a talent for writing deep-yet quirky pop/rock songs.  His 2010 release, The Chronicle Of A Literal Man, was a musical breath of fresh air bursting upon a world of jaded pop.  Morsberger’s most recent work, Ghost Before Breakfast, takes a darker yet no less enigmatic turn.  The album was written before Morsberger learned that he had inoperable brain cancer, yet listening to the album you’d think that some part of his mind knew something was going on.  The album foreshadows Morsberger’s battle in lucid terms, eking out the façade of beauty and tragedy that is real life.
Ghosts Before Breakfast travels the map, musically, from solid Americana to 1950’s rock to catchy pop tunes.  Kicking off with the title track, Morsberger sets the tone for an upbeat look at the downward slide that is the end of life.  “Ghosts Before Breakfast” is upbeat, almost jaunty.  In “The Great Whatever”, Morsberger explores facing the afterlife without concrete faith of belief to hold onto.  There is a gentle exploration going on here, a sort of intellectual curiosity about the spiritual truths of life and death.  “The Distinguished Thing” is a catchy little rock number that you won’t be able to get out of your head.
Morsberger flaunts his talent for lyrical imagery in “Cobblestones”, lamenting the one who left him alone.  The easy listening arrangement is a nice contrast to Morsberger’s rough hewn voice.  “The Wild Wind” has a mellow-Springsteen feel, a solid Americana turn that’s deeper than it first appears.    “A Man Of Much Merit” is a letter from son to father about impending death, and expressing appreciation for his surroundings and his past.  This one is a heartbreaker – beautiful and without the expected sense of self-pity.  This is a ‘WOW’ moment.  “Celebrity Artist” finds Morsberger turning his prodigious wit on the modern concept of what it means to be a celebrity.  The song is well written and amusing.
It’s into 1950’s style pop/rock for “For Heaven’s Sake”, and into the 1960’s for the Beatles-esque “Rocket Science”.  Try to get this one out of your head.  “Feather In A Stream” is another wow moment for Morsberger, using strings to striking effect to highlight a Zen look at the world to come.  “Christine In Your Salon” is an ode to a remarkable woman, beautiful in its honesty and simplicity.  Mark that down as a third ‘WOW’ for Morsberger.
Ghosts Before Breakfast finds Rob Morsberger negotiating impending tragedy with a subtle grace that is inspiring.    It is a subdued work, full of quiet reflections and keen insight, but even here Morsberger doesn’t leave his sense of humor at the door.  Morsberger finds beauty in darkness, bring light to the gloom and doom of impending death, by choosing to focus on the life remaining than the end to come.  Ghosts Before Breakfast is inspiring.
Rating:  4.5 Stars (Out of 5)
You can learn more about Rob Morsberger at www.RobMorsberger.com or www.myspace.com/robmorsberger.  Ghosts Before Breakfast is available through the e-tailers below, as well as through the Wildy’s World Amazon.com store.


Please note that the Amazon.com prices listed above are as of the posting date, and may have changed. Wildy's World is not responsible for price changes instituted by Amazon.com.
Posted by Wildy at 6:45 AM