Dolly Varden - For A While 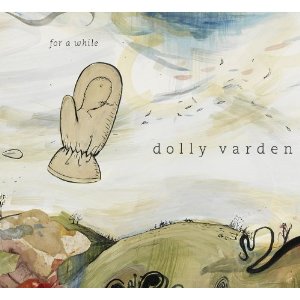 Dolly Varden – For A While
2013, Mid Fi
There is nothing fishy about Dolly Varden.  The band, centered on husband and wife team Steve Dawson and Diane Christiansen, has been charming residents for close to two decades.  The band recently released their sixth studio album, For A While, weaving subtle story-teller style songwriting with smooth arrangements that run both sides of the Americana road.
Weaving their way through stories of love, heartbreak and remembrance, Dolly Varden shows that they continue to grow in the strength and depth of their art.  The band kicks off with the poignant ballad “Del Mar, 1976”, a remembrance of childhood ups and downs that is full of gorgeous imagery.  “For A While” shows off the band’s vocal work, with Christensen on lead vocals and Dawson wrapping his voice around hers like a lover’s embrace.  “Done (Done)” builds on the band’s disparate approaches.  A big, open arrangement with an eminently catchy chorus gets placed upon low key rock verses, creating a sound that’s intriguing and engaging.
Desolate beauty is the phrase that comes to mind when considering “Girl In A Well”.  This track will be a tough sell for some, but there is an aesthetic here that cannot be ignored.  Dolly Varden shows off their pop sensibilities in “Walking The Chalkline Again”.  This is a number that gets inside your head and stays there.  “Mayfly” is, in many ways, the centerpiece of the album.  It’s an unvarnished love song that is grateful in tone and lyrically plain-spoken, yet cast against a melancholy arrangement that is beautiful and sad all at once.  That mix seems like it shouldn’t be able to work, yet it does.  “The Milkshake Incident, Part 1” is a brief instrumental that probably deserves an explanation, or at the very least a visual.  There is potential here, but one gets the sense that a sense of mystery, not fleshing out the idea, is the artists’ intent.
Diane Christensen once again takes the mic for “Temperamental Compliment”, a dark and edgy (but catchy) number full of angular guitar work.  This is ideal material for a movie soundtrack.  “Mayfly” aside, “Saskatchewan To Chicago” may be Dolly Varden’s crowning achievement on For A While.  A family history ensues, with each step bringing our storyteller closer to where he is today.  The tale is bittersweet, yet steadfast in its pragmatic take on change.  “Why Why Why” is another standout; the song has hit single written all over it.  Doubt, anxiety and discovery are all wrapped up in a brilliant three and a half minutes of songwriting.  Dolly Varden closes out with a pair of what might otherwise be B-sides.  “Favorite Friend” and “Thank You” are solid enough, but seem woefully out of place here both in style and in sound.
For A While displays Dolly Varden as a band that’s steady in its craft yet continuing to grow artistically.  There are some rough edges here, but on the whole For A While is subtly brilliant.
Rating: 4 Stars(Out of 5)
Learn more at www.dollyvarden.com.