Jamie Block - Whitecaps On The Hudson 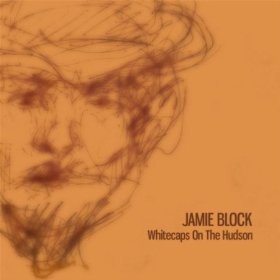 Jamie Block – Whitecaps On The Hudson
2013, Jamie Block
Music is as real as the wind, and as ineffable as time.  Why one person can sit at a piano on their first try and pick out a tune, while others spend their lives looking at one as a foreign object is unknown.  But it is clear that some people just have a natural talent for making music.  What’s more, those individuals can’t escape the gravity of their own talents.  Like moths to a flame they return again and again.  Yes, we’re speaking allegorically of Jamie Block.  Block, who was an Indie darling gone major label during the 1990’s who opened for the likes of The Brian Setzer Orchestra, They Might Be Giants and Bob Mould.  His debut album Lead Me Not Into Penn Station garnered critical praise from Alternative Press, and let to his signing with Glenn Ballard’s then nascent Java Records.  Block eventually traded the musical life for a pinstripe suit and a seat at the Wall Street table, but came back by demand of DJ Claudia Marshall.  Cut to 2013, and Block offers up his most personal and enigmatic work to date, Whitecaps On The Hudson.
There is much to be said for Block’s songwriting.  It’s witty, clever and insightful.  There is a sort of maniacal aesthetic to Block’s songwriting, as if he were the real life incarnation of Prak, a character from Douglas Adams’ Hitchhikers series who must tell the whole Truth in its absolute form.  Block’s songs read in much the same way, he is giving insight into a life (perhaps his own) that runs much deeper than the usual confessional songwriter gig.  He warms up slowly with “Black Eyed Susan”, but by the time Block engages “Henry” he is in full story-teller mode.  The subtle guitar, including some stunning slide work, frames this perfectly.  “Kate” has an interestingly detached air to it, as if the narrator is trying hard not to care about the subject of the song.  The presentation works as authentic, but no one will believe the air is true.
“B.A. Man” has an elemental blues/folk feel.  Sparse and on edge, the arrangement is the perfect balance to Block’s more whimsical lyrics.  “Somebody Beat The Wiz” is an odd, eclectic story about desolation and growing past one’s prime.  It’s intriguing and brings about a strong songwriting comparison to Randy Newman.  Like Newman, Block seems to spend much of his time writing in character.  Also like Newman, Block does it very well.  They have similar approaches, allowing the quirks of the song’s character to shape the song.  “Can’t Sleep” represents what Paul Simon might sound like if he were clinically depressed.  The stumbling arrangement here is intriguing; with a compelling melody and song structure despite it’s slightly disorganized feel.
“Whitecaps On The Hudson” is an internal monologue that is difficult to follow.  Reflection, escapism and luck all come into play here in the thoughts of a social hermetic nomad who touches lives as he needs to but never stays.  Block memorializes ill-fated dare devil Sam Patch in a song of the same name.  The quasi-spoken word verses and sparse rock sound is reminiscent of 1990’s indie rockers The Men.  It’s an entertaining listen.  Block seems to get a bit more serious on “I’ll Keep It With Mine”, which is very well written with a memorable melody.  Block keeps this aesthetic with “Show You Mind”, a solid love song, of sorts that carries some of the neurotic tendencies of a Randy Newman or Lyle Lovett tune.
“1993” is a mid-life crisis song, pure and simple.  The spoken word joint reflects on a sense of being stuck while everyone around you moves on.  Block handles this in entertaining fashion, stating that, “I’ll stumble through the Middle Passage” before launching into a musical bridge.  The self-deprecating humor here gives light to a dark time, and it’s probably one of Block’s finest pieces of self-satire.  Block works his way through “My Head”, and then heads out the door with the sweet, rolling country ballad “Far Away”.  Led by a forlorn guitar, Block tries to make sense out emotions he seems to understand on an elemental level but perhaps never fully grasps.  It’s an entirely human and wonderfully artistic moment.
Jamie Block continues to be one of the best under-the-radar singer/songwriters working today, akin to folks such as Rob Morsberger and Ron Hawkins, but also sharing characteristics with Lovett and Newman.  It’s hard to imagine Block staying under the radar, but his kind have always had a talent for carving out their niche just out of sight, where their songs can be heard by all who want to listen.
Rating: 4 Stars (Out of 5)
Learn more at www.jamieblock.com.