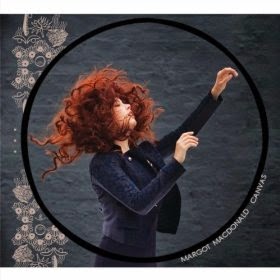 Some folks spend a lifetime figuring out what they are called to; others begin to excel before others are even through puberty.  Margot MacDonald is that sort of artist.  Margot began singing with the Washington National Opera at the age of 10, and released her first album of original material at the age of 12.  In the past ten years she has released a total of four original albums, in the process winning the Washington Area Music Association’s Artist of the Year award (2012).  MacDonald’s latest cycle, Canvas, runs the gamut from dreamy pop to rock, with MacDonald’s amazing vocal orchestrations as the star of the show.

Canvas opens with “Speed Of Sound”, a gorgeous vocal tapestry in the form of a rock and roll song.  MacDonald’s sound is reminiscent of early Sarah McLachlan but with a bit more force.  This song is built on meticulously crafted swells of sound, and MacDonald’s voice is amazing.  “Straight Talk” is a catchy piece of pop/rock songwriting with a memorable chorus.  The hook here is infectious, and will stay with you long after the song has stopped spinning.  “Feel Free” is a catchy, frenetic rock arrangement.  Strings and voices fill out the top over pure rock instrumentation, creating an intriguing sound and style to complement MacDonald’s enigmatic voice.  “Beautiful Strangers” changes vibes in an esoteric song of longing.  MacDonald recalls a young Kate Bush here, but with a more powerful and evocative voice.

Margot MacDonald is breathtaking on “Call”, creating amazing textures between the layered effects of her voice and the existing instrumentation.  “To The Ground” mixes musical essence and form, with an arrangement not unlike rolling waves.  Amidst this reciprocal rhythm is the cool, clear voice of Margot MacDonald, and the effect is stunning, a true “Wow” moment.  “Changing Times” seems to break the zone that MacDonald has been in thus far on “Canvas”.  It’s a solid enough piece, but perhaps is just not up to the level of the rest of the material on the album.  “Bubble Wrapped Heart” is a speculative and sweet love song.  MacDonald is plainspoken and ultimately real against a gorgeous, full-bodied arrangement.  A key moment here is the interplay between voices and electric guitar on the extended bridge.

“Pretty Little Cage” is a dreamy ballad about sorrow, recovery and moving on.  The broad and beautiful palate of the arrangement accents the unusual timbres of MacDonald’s voice.  “Someday/Monday” is a melancholic ballad with a bit of bounce to it.  It’s a nice change of pace and highlights the breadth and depth of MacDonald’s growing talents as a songwriter.  Next up is “Colorblind”, an ambitious rock arrangement with tremendous build.  This is perhaps not as accessible as some of the other material on the album, but fortifies the sense that MacDonald’s songwriting strength is still being explored.  This is breaking new ground for MacDonald, and it comes off surprisingly well.  MacDonald closes with “Teardrop”, an eerily beautiful attempt to move on that accents MacDonald’s prodigious lead with a vocal chant underneath.

Margot MacDonald may owe her musical niche and explorations to the like of Kate Bush, Tori Amos and Sarah McLachlan, but her sound is very much her own.  While basing herself in the accessible world of pop and rock, MacDonald takes border crossings into other sounds as a matter of course, following wherever her many-armed muse may lead.  Canvas shows an artist who is perhaps not scratching the surface of what she can do, but is just beginning to explore the complex depths of her talents.  This is one exploration that should be a thorough joy to witness.

This is the most thorough, thoughtful & insightful appraisal of Margot MacDonald’s new album to date. It’s a must read for any music lover looking for an on-ramp to this delightfully different, uniquely captivating collection of cuts called Canvas.