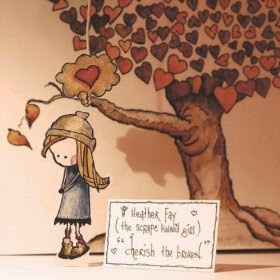 Heather Fay writes from the heart and the mind, blending the two into a coherent read on humanity and her life experiences.  Fay’s distinctive storytelling mien integrates factual and emotional styles akin to artists such as Tom Waits, Carole King and Fiona Apple.  Fay is a regular in Connecticut and New York City (The Living Room, Rockwood Hall), but also performs regularly online via Google Hangout.  Fay’s latest album, Cherish The Broken, is a dynamic collection of songs spanning the genres of folk, pop, country, bluegrass and Americana.  Fay’s style is unadorned and straight from the heart, but shows real intellect and understanding of the world.

Cherish The Broken features stripped down arrangements that allow Fay’s songwriting and voice to shine.  Leading with “Drive You Out Of My Mind”, Fay begins a cycle of emotional breakdowns and breakthroughs.  Here she is trying to move on after a heart break.  She keeps things simple here with a stripped down arrangement and a sweet, unaffected voice.  “Autumns Chill” is lovely still life in song, carved from the bedrock of folk tradition.  “Breaking My Heart” moves back to a country sound with an ironic monologue to the man who is breaking her heart telling him just how good he is at it.  “Scrape Knee’d Girl” is a holdover from Fay’s first album.  It’s offered here in a gorgeous, stripped down arrangement.  A song of insecurity that grows into strength, this is one of Fay’s finest songs.  The autobiographical number is a gorgeous, plain-spoken piece of poetry about being yourself no matter what, told in the parallel story of a mother who set on making life better for her daughter than she had herself.

“I Would For You” is a speculative, questing love song.  The organic arrangement is decorated by the occasional flourish, highlighting the simple and elegant beauty of the songwriting.  It’s easy to imagine this song covered in a fuller arrangement and turning into a radio hit.  “Stay” is a mellow love song with outstanding instrumentation including strings, guitar and mandolin.  The song is utterly gorgeous; lush in spite of its simplicity.  “I’ve Been Known” is a song full of resignation, delivered in a counterintuitive snappy rock arrangement.  The song is extremely catchy yet understated, building into a solid chorus with a memorable melody.

“Life Is Beautiful” finds just Fay and guitar waxing eloquent on the important things in life.  This is the artist at her most heartfelt and real, and sounds like it was cut live in the studio in a single take.  “Where We’ll Meet Again” is sad yet hopeful, a sweet remembrance with hope for reuniting one day.  The song is pretty, simple and sweet.  Fay closes with a surprising cover of Michael Jackson’s “Thriller”, a unique folk/country ballad.  It works better than you might expect, due in large part to Fay’s unpretentious approach.

Heather Fay turns in an incredibly nuanced and artful performance with Cherish The Broken.  With simple adornment and an utter lack of calculation, Fay’s songwriting and earthy voice carry the day. Fay uses modern technology to continue to create music and delivery live performances while keeping family as the center of her life.  It’s a laudable approach.  It’s also easy to see how Fay could be a huge star one day.  Fay is one of the leaders of the new model for delivering music to the masses.  She’s successful because she’s real, honest, true and talented.  Cherish The Broken is brilliant.

Learn more at www.heatherfay.com.
Posted by Wildy at 6:57 AM