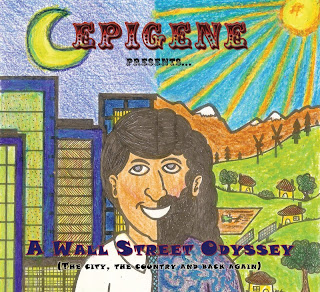 Epigene – A Wall Street Odyssey
2011, Amammi Music
Upstate New York rockers Epigene have made a name for themselves over the past decade by writing outside of the box rock n roll songs.  Epigene’s latest work, A Wall Street Odyssey, may be their most ambitious work to date.  Primary songwriter Sean Bigler attempts to capture the fall and rebirth of Wall Street and her denizens over the past few years in an art-rock concept album with pretentions to being a rock musical.
A Wall Street Odyssey follows the life and times of the fictional Yossarian, an investment banker living the high life on Wall Street who comes to a crisis of conscience through the crash of 2008.  Yossarian moves out of the city and finds a life he never dreamed of, and then returns as an advocate for less money, ala Jerry Maguire.  The album is steeped in rock influences including The Who, The Kinks, Green Day and even a touch of Andrew Lloyd Webber (from his rock musical phase in the 1970’s).  All Wall Street Odyssey starts strong on “Looks Like I Made It”, which sounds like the Beatles jamming alternately with Rick Wakeman and Dennis DeYoung on keyboards.  It’s a great opener for an album or a musical, with all of the energy and urgency you might expect.    Big scale pop and electro rock are the name of the game on “Money Master” and “The Catch 22”, showing the big sale and the beginning of the downward spiral.  “Take My Head Off” is the beginning of the downfall, both for Yossarian and for the album as a whole.  The struggle to overcome the cognitive dissonance of a life lived in essential conflict is reflected in the mild dissonance of the angular composition.
Unfortunately, things go quickly downhill from there.  Yossarian’s breakdown is reflected by a breakdown in cohesion of the songwriting that isn’t recovers until ¾ of the way through the 25-track album.  In the meantime it’s a self-referential bland pop experience that runs the gamut of 1970’s music, from AM radio easy listening music to smarmy pop.  Interestingly enough, it’s when Yossarian returns to Wall Street to see the scene of his crimes that the energy and panache returns.  “Stranger In A Strange Land” may remind listeners of 1980’s rockers Men At Work in sonic style.  The album gets preachy on “Colonization & Globalization” and stays there for much of the rest of the way.
A Wall Street Odyssey starts with tremendous potential, but quickly fizzles into a narcissistic political diorama of bland musical compositions and pretentious political motivations.  Epigene does show flashes of great songwriting on A Wall Street Odyssey, but this is an example where the intended message hijacks the music.  If you’re into overly preachy, mellow-art rock that dances into the edges of psychedelia from time to time, then A Wall Street Odyssey will be right up your alley.
Rating: 2 Stars (Out of 5)
Learn more about Epigene at www.epigenemusic.com or www.myspace.com/epigenemusic.  Keep checking Epigene's sites for availability.
Posted by Wildy at 7:21 AM

Thanks so much for your post, pretty helpful information.