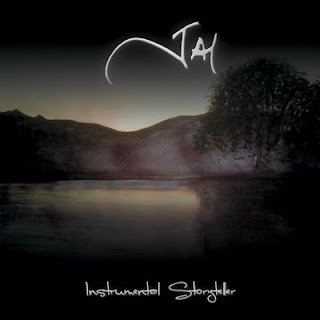 Jai - Instrumental Storyteller Vol. 1: Discovering The Peace
2010, Jai Audio
There is the man, and then there is the enigma.  Walking down the streets of Mount Vernon, Washington, Joe Wilbur looks like any mere mortal.  But when Wilbur steps into the studio or on-stage he is transformed into the artist known as Jai.  Spinning musical webs in a guitar-driving alternative instrumental universe, Jai recalls mental images of artists such as Mark Knopfler, Sigur Ros, Mogwai and David Gilmour.  Starting with home demos back in 2003, Jai continued to develop his craft and cemented his passions in academia with a degree from the Musicians Institute in 2008.  In 2010, Jai threw his hat into the musical ring for good with the release of his debut album, Instrumental Storyteller Vol. 1: Discovering The Peace.
Instrumental Storyteller Vol. 1 opens with the ambience of a baby crying and the soothing voice of a mother while she winds up a music box.  The music box turns into Jai’s synth.  “Lullaby”, as the track is called, is a slow, halting melody that progressively slows in a trite bit of theatrics.  “Lady Of The Night And Dancer” features a sweet melody in a tightly constricted and cyclical arrangement.  This is pleasant background music ala Kenny G.  Acoustic guitar takes the lead voice over a bed of synth, bass and percussion.  Jai perhaps makes things a bit too busy at the end, with too many instrumental voices competing unnecessarily for attention.  “Don’t Reach For Those Pills” features a heavily layered sound with an ethereal feel.  It’s a complex and enjoyable exploration that blends synth and electric guitar nicely.
“Stormcloud, Bring Rainbows” uses thunder and rain sounds as the background to a slowly moving progressing of synth and piano.  It’s an unimaginative nature-sounds CD style akin to the compilations previously sold by chains such as Brookstone.  “Pray” is dark and conflicted, starting out nicely with acoustic guitar but losing steam in an undirected wash of synth.  “Euphoria Pt. 1 – Release” has an interesting sense of energy and movement at the outset and explodes into a new age rock tune with vibrant guitar taking the lead in a lyric solo line.  While well written, the overall emotional feel of the piece is more the expectation of euphoria than the thing itself, and sounds like something Harold Faltermeyer may have written while he was writing the Top Gun score.  “Dream Of Love” has a similar sound but with a more ethereal air.
“Angelic Touch” is awash in guitar with a synth bed.  It’s a solid piece of incidental music but there’s no real grab for the listener.  “Euphoria Pt. 2 – Return” is closer to euphoria than part 1, but still too reserved for the title.  The song has a questioning aspect, missing the confidence or jubilance that euphoria would imply.  There’s perhaps a guarded happiness here, but the lack of technical inspiration or spirit leaves the listener a bit flat.  “Walk Of Remembrance” is bland, with vocalizations and the sounds o f children playing overdubbed in a seemingly cynical attempt to draw emotion where there is none.  On “At Peace”, Jai offers a slow, ambling melody against the backdrop of nature sounds.  Unfortunately it sounds like Jai is going through the motions at this point to fill out space on the album.  Jai closes with “Love Never Ends”, in a wash of synth with big chords and vocalizations.  The effect is pretty, but there’s no spark.
Jai shows some promise on Instrumental Storyteller Vol. 1: Discovering The Peace, creating a handful of compositions that are inspired and occasional even of film quality.  Unfortunately there’s an equal measure of banal and spirit-less compositions here as well.  At his best, Jai writes with a scope and depth that captures moments musically.  However Instrumental Storyteller Vol. 1: Discovering The Peace is an example of a great EP turned into a middling album by too much filler.
Rating: 3 Stars (Out of 5)
Learn more about Jai at http://www.jaiaudio.com/.  Instrumental Storyteller Volume 1 - Discovering The Peace is available digitally from Amazon.com.

Here, I don't actually consider it is likely to have effect.