Megan Slankard – A Token Of The Wreckage 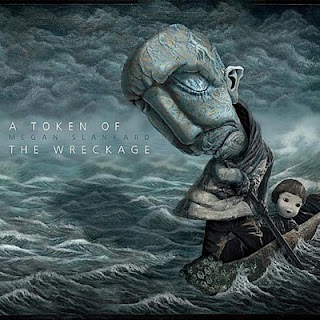 Megan Slankard – A Token Of The Wreckage
2011, Megan Slankard
Megan Slankard is relatively young in the pop music game, but has released three critically well-received albums as an Indie artist and has won numerous honors in song and songwriting competitions while still in her twenties.  Touring throughout the US and Europe supporting artists such as David Knopfler (Dire Straits), Colin Hay (Men At Work), Hootie and the Blowfish and Dishwalla (among others), Slankard has built up a solid following that’s helped her sell over 25,000 albums without a record label behind her.  Slankard’s music has been featured on TLC’s What Not To Wear, and she has been a finalist in numerous national and international competitions over the past several years.  On March 8, 2011, Slankard releases her fourth album, A Token Of The Wreckage, a 12-song cycle about growing up and making peace with the world around you.  Slankard offers up characters and situations that highlight the sometimes painful process of coming to terms with being an adult in a series of well-written and precisely performed sophisticated folk/pop songs.
Slankard wastes no time, opening with the title track.  “A Token Of The Wreckage” finds the artist picking over the remains of a broken relationship.  Slankard finds a silver lining in the pain and heartbreak, and reflects it in a pretty, ethereal arrangement that’s appealing to the ears.  “Fair Enough And Farewell” is mildly catchy, but more importantly really showcases Slankard as an artist.  Her voice, which is reminiscent of Rikki Lee Jones, is in fine form throughout, but Slankard also shows a distinctive ability to craft musical arrangements that are perfect complements to her vocal lines.  “Our Little Secret” is a great bit of folk/pop; catchy enough to insinuate itself into your brain and recur there unbidden throughout the day.  The chorus is particularly infectious.
“The Tragic Life Of Caleb” offers a perspective on life and death from someone who lives in constant fear of being forgotten once passing the veil.  This is a gorgeous exposition of fear, insecurity and hope for a love that transcends death.  The utter humanity of the character Slankard creates here is stunning.  “My Obsession With Bees” is a musically dense and appealing piece of pop songwriting.  While Slankard’s lyrics are often integral to her songs, and here they are no less important, listeners will be forgiven if they simply immerse themselves in the sound on this song and enjoy it for what it is.  “The Happy Birthday” is a bright and airy folk/pop offering; something of a musical breather where Slankard allows the ambience of the song to hold sway.
“The Pain Of Growing Up” could easily have been an alternative title for the album, and probably more fully expresses the theme that runs beneath the songs offered here.  The mid-tempo number uses distinctive imagery to explore the moving on of friends through college; the friendships that once seemed unshakeable that have just become memories to be packed away with mementos of the senior prom.  Slankard isn’t just a songwriter here; she’s an artist.  “The Pain Of Growing Up” is a wonderfully mature and articulate exploration of that moment or time when adulthood finally hits home as an intellectual and emotional tsunami, carrying with it the realities that wash away the often uninformed expectations of youth.  It’s a tremendous bit of songwriting, and one of Slankard’s best.
“Soundtrack” increases the tempo a bit, but keeps the edgy angst that has filled the album thus far.  This is a great mid-tempo pop song; highly licensable and a great listen.  Slankard takes something of a breather on “Beautiful Makeshift” and “The Last Thing You Say”, both solid offerings but perhaps not quite in league with the rest of the album.  She returns to form, however, for the wonderfully written “You And Your Bright Eyes”, a wistful retrospective on a relationship that covers both the good and the bad.  Slankard’s aurally appealing Americana arrangement is the perfect touch for the mix of melancholy and determination that’s on display here.  A Token Of The Wreckage takes a bow with “Show Up”, looking through ambivalent eyes at a dysfunctional relationship.  Slankard explores the competing urges to see him gone for good and the almost helpless hope that arises in her heart when he turns up again.  What sounds like a done deal at first becomes more unsettled as the song progresses, with self-doubt nipping at her heels.  Slankard builds the tension in perfect measure here; it’s a tremendous way to close off the album.
A Token Of The Wreckage was three years in the making, and very much worth the wait.  Megan Slankard shows an advancing maturity in both songwriting and artistry; her development an almost unwitting parallel for the album’s main theme.  In spite of a couple of slow moments, A Token Of The Wreckage is the sort of transitional album that changes listener’s perspectives on an artist.  Before now, Megan Slankard was a very talented songwriter with a lot of critical praise and a solid performing.  Somewhere over the past three years, Slankard grew into the artist she was always meant to become.  Somewhere in there, she became an artist you expect to still be making albums ten, twenty or even thirty years from now.  Perhaps that knowledge is the ultimate token.
Rating: 4.5 Stars (Out of 5)
Learn more about Megan Slankard at http://www.meganslankard.com/ or www.myspace.com/meganslankard.  A Token Of The Wreckage is available digitally from Amazon.com.
Posted by Wildy at 6:39 AM