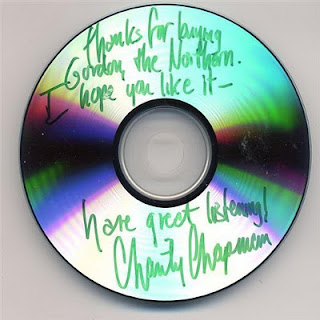 Charity Chapman – Gordon The Northern
2006, Charity Chapman
Charity Chapman is just this gal, ya know?  Granted, she’s an incredibly talented songwriter…  and she has this incredibly sweet and vaguely smoky voice that makes you stop what you’re doing and find out just who that is singing on the radio.  But the young woman who lived her early live in Pensacola, Florida and then finished growing up in the verdant valleys of Colorado is as down to earth as they come.  It’s one of the reasons her songwriting is so clear and honest; there are no pretensions with Charity Chapman.  What you see, and what you hear, is what you get.  Its why, in spite of remaining an Indie songwriter and performer, she’s seen her music featured on Oprah, Felicity, Ugly Betty, and both the US and UK versions of The X Factor.  Chapman’s EP, Gordon The Northern, is a collection of old and new songs that are guaranteed to impress, and are likely to begin a long artist/listener relationship.
The EP opens with “If I Could Fly”, a song with many levels.  A gorgeous love song with a vaguely dark temperament, it is also a song of hope.  The song was featured in season 4 of Felicity, and has the distinction of being the tune that Keri Russell’s character graduated to.  The mixed sense of unrequited love and dreams breaking upon new shore is dizzying, but perfectly maps the collision of old and new desires and hope that are the watershed of adolescence on adulthood.  The song succeeds on the genuine sense of standing at the precipice of a new world, but looking back with the door to an old world not yet closed.  Chapman herself sounds very much like Canadian chanteuse Maren Ord, and ingratiates herself with her sweet, sweet voice.
“Free” is an intriguing declaration of a movable self.  The song has a solid melody, and is packaged in an arrangement that is mellow on the surface but full of a deep energy.  Chapman’s voice shows many colors and shadings here, and it’s easy to get wrapped up in the sound of her voice.  “In My Room” is a song of heartbreak; of searching for an answer where none is to be found.  Chapman’s essential question, why he walked away, seems to pale in the face of the search itself.  The pain here is palpable, with a dramatic sense that is theatric in presentation and yet organic and real.  This mix is incredibly difficult to find; not a matter of craft but of honesty in the songwriting process.  Chapman maintains a strong pop sensibility without sounding like she’s trying to write a pop song, an impressive achievement in and of itself.
Gordon The Northern is an intriguing perspective on the artistic development of a songwriter left to her own devices.  Charity Chapman opens with her most well-known song, and then moves on to two more recent tunes.  You can hear the depth and complexity of her talent and of her intellect sprout before your very ears on Gordon The Northern.  What’s most intriguing is that throughout the process, she never loses the twin roots of her talent: A delicious ear for melody and an integrity and honesty in her songwriting that is compelling.  Chapman manages to have it all on Gordon The Northern; she is an artist who is creating meaningful and aesthetically pleasing art that just happens to be commercially viable.  Take one listen, and you’ll be hooked.
Rating: 4.5 Stars (Out of 5)
Learn more about Charity Chapman at www.charitychapman.com or www.myspace.com/charitychapman.
Posted by Wildy at 6:11 AM

She sounds like an amazing person, and I want to hear her music.

Thanks Wildy for the great review! Wow....I felt like you totally get my music and that's a very satisfying feeling. :) Anyone who wants to hear my tunes can go to itunes & just put in my name and download away.
Thanks for the listen!!
Charity