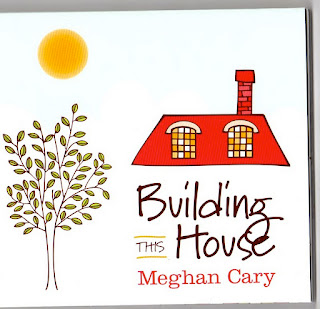 Meghan Cary - Building This House
2012, Meghan Cary
Meghan Cary was Indie before Indie was cool.  The former theater actress fell into songwriting through personal tragedy in the late 1990’s.  What began as catharsis and tribute to her then-recently deceased fiancé turned into a win of Billboard Magazine’s Critics’ Choice for Best Newcomer in 1998.  Cary was quickly drawn into the folk scene, touring extensively and recording/releasing three critically acclaimed albums.  Cary met her husband, Peter Farrell (The BlackTails) at a Meghan Cary show at CBGB’s Gallery, at a time when touring was becoming old hat.  She settled down and built a home and a family, but music was never really gone from her life.  Cary returns on January 31, 2012 with her first album in eight years, Building This House.  A story of recovery, rebuilding and ultimately, happiness, Building This House is a personal tale full of the resilience of the human spirit.  And while Meghan Cary has been rightly compared to the likes of Shawn Colvin, the Indigo Girls, Natalie Merchant and Stevie Nicks over the years, on Building This House she offers a voice that’s influenced by those above, but distinctly her own.
Cary gets started with the title track, a refreshingly smooth and mature piece of pop songwriting that’s an ode to family to be.  Cary’s voice is mildly soulful, and the almost harpsichord style sound from the synth gives this something of a baroque-pop ballad feel.  “Lost You In The Light” is a brilliant marriage of poetry and music.  Cary’s mildly soulful pop arrangement wraps itself around lyrics about the human tendency to lose sight of what’s important from time to time.  This organic blend of thought and muse reflects an artist who spends a lot of time inside her own thoughts, yet still manages to convey the output in an artful manner.  “Responsibility” is a morality tale told from a personal perspective, reflecting on those we see around us in hardship every day.  The message is solid and poignant in difficult economic times, but the subject has been covered many times over with more power.  Nevertheless, the wonderfully jazzy piano work underscores an arrangement that will get this song some attention.
“I Might Miss You” shows off Cary’s ear for melody in no uncertain terms.  A song about discovering what you really want after you’ve already cast it aside, the song’s theme unrolls in your brain like it was always written there and therefore refuses to leave.  This sort of honest, sweet love song is always appealing, but Cary delivers it with a sincerity and simple power that is compelling.  Cary digs into a delicious blues/rock arrangement with lots of soul for “Through Walking”.  This catchy number builds slowly, and will likely become a live favorite.  It would be nice to hear Cary open this one up a bit more vocally, but the song sits well as delivered.
“Invitation” is a powerful love song that might be about opening your heart to love, or perhaps something a bit more carnal.  Either way, Cary plays it straight and manages to create one of the most intriguing listens of the newborn 2012.  The compact pop/rock arrangement delivers the song with an economy of style that allows the raw desire of the song to be the star.  “Darker Song” is all about the unstable emotional ground that leads to a breakup. This woeful, haunting tune finds Cary coming to terms with what her heart has known for some time.  The universal appeal of this song will come from the fact that almost anyone who hears it will have been there once in their life, and Cary captures the moment in a near-perfect blend of poetry and musical scenery.
“Moon Song” explores the complicated emotions that arise from learning a former love has moved on. In this case he is getting married.  This is all about the emotional turmoil that turns up at such a time, particularly when unsettled feelings still in play, and about the phone call or letters that happen at such times that rarely turn out of the better.  Cary plays this as if she’s lived it, and her representation in song is compellingly human, mixing desire, need, desperation and pain with that one little drop of hope that drives humanity to seek the impossible.  This is a brilliant, if raw, piece of songwriting that will haunt you.  Cary closes with “Live!”, a Sunday go to meeting song with a single message: seize the moment.  The energy here is tremendous, and punctuates the collection of songs about chances lost and gained with a simple directive: never give up on yourself.
Meghan Cary has lived both dreams and nightmares, and reflects upon them all in artful and symbolic songs on Building This House.  This album is a study in remembering that not only are good experiences build us, but that the ones we’d rather forget are often even strong shapers of the people we are to become.  Cary shares her story in honest and uncontrived language throughout the album, and blends these stories with arrangements that often perfectly shadow the mood of each moment.  The only possible complaint about the album is that it took Meghan Cary eight years to put it all together.  Listeners will find themselves fervently hoping that it won’t be eight years until the next one.
Rating:                  5 Stars (Out of 5)
Learn more about Meghan Cary at www.meghancary.com, where you can pre-order Building This House, as well as as purchase copies of her albums New Shoes, Onion Dream and Live At Your House.  You can also get a free song download from the new album for signing up for Cary's mailing list.

Thanks so much Wildy, for listening with heart wide open.
Love........Meghan