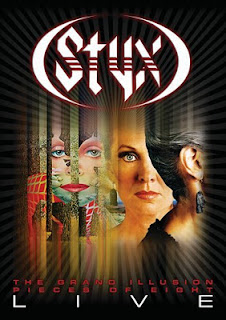 Styx – The Grand Illusion/Pieces Of Eight: Live
2012, Eagle Rock Entertainment
From 1977 to 1981 there wasn’t a bigger name in American Rock N Roll than Styx.  The first group to ever score four consecutive multi-platinum albums, Styx dominated AOR and pop radio, and tour box offices, like few others up until their first breakup in 1984.  Times change, and musical styles move on.  Styx has never recaptured the commercial success they had in their prime, and the revolving door of band members and side projects since the band’s reunion in 1996 has made for a sound that is dynamic but altered from the signature sound of the band’s heyday.  In 2011, Styx put on a short concert tour that included complete live renditions of the band’s classic albums The Grand Illusion and Pieces Of Eight.  That tour is memorialized now on DVD, Blue-Ray, and combined DVD and 2-CD set.

The Grand Illusion/Pieces Of Eight: Live is a visually stunning and musically surprising performance.  Some of Styx’ greatest hits were featured on these two albums, including “The Grand Illusion”, “Fooling Yourself”, “Miss America”, “Come Sail Away”, “Blue Collar Man” and “Renegade”.  While the vocal mix has changed over the years, and Lawrence Gowan will never quite replace the voice of Dennis DeYoung, Styx managed to capture the same zeitgeist that made them the kings of Arena Rock for close to a decade.  The video presentation and audio quality are perfect, and Styx is entirely on their game on-stage.

The more things change, the more they stay the same.  Styx continues to be one of the highest grossing live acts in the U.S., and it’s easy to see why on The Grand Illusion/Pieces Of Eight: Live.  So while lesser acts are ensconced in the Rock N Roll Hall of Jann Wenner’s album collection in Cleveland, true Icons of rock music such as Styx continue to do what they do best:  Rock and roll.

Learn more about Styx at www.styxworld.com.

Please note that the Amazon.com prices listed above are as of the posting date, and may have changed. Wildy's World is not responsible for price changes instituted by Amazon.com.
Posted by Wildy at 1:19 AM