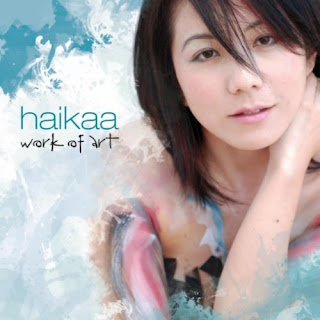 
Haikaa Yamamoto is a pan-cultural pop-star in the making.  Born in Brazil, Haikaa was raised in Japan and has studied both there and in the United States.  Her music shows influences from all three cultures and beyond, and her message is classically eastern: peace, love and respect.  Haikaa’s album Work Of Art is undeniably warm and sweet, and the songs are delivered with a voice that gets inside of your head.  Haikaa breaks down barriers through her understanding of the world, but she also projects the sort of personality as a performer that will draw listeners in and help them feel more open to ideas they might not have considered otherwise.
At the outset of Work Of Art, before you even really take notice of her songwriting, you’ll be enthralled with Haikaa’s voice.  It’s charming and out of the ordinary, with a warm sound and unusual tone that’s inherent both in herself and in her multi-cultural exposure.  In this day and age it’s not always possible to know whether a voice is doctored on a recording, but the end result is quite wonderfully unique.  Haikaa wastes no time impressing with her songwriting ability either, launching into “Everything I Know About Love”, a solid, low-key pop ballad that’s wonderfully constructed.  There is awkwardness in the lyrical constructs at times, but this fits well with the young and uncertain voice the song is written in.  The harmony vocals here feel out of synch with both Haikaa and the arrangement, and therefore become more of a distraction than an organic part of the whole.  “Work Of Art” finds Haikaa demanding to be seen for who she is.  It’s a positive message that parents will like their daughters to hear from pop music, and it manages to avoid cliché to become truly meaningful.  The message itself is wrapped in a pretty pop arrangement with Alan Parsons’s style vocal harmonies.  It’s simply gorgeous.
“Call Me By Name” continues in a similar thematic vein, and continues the wonderfully-constructed pop path that Haikaa has embarked on.  It would be easy to see this song serving as a soundtrack component for a teen television drama or even for a movie.  “Happy” has a positive, feel-good vibe.  It’s a piece of fluffy pop music that isn’t ashamed to be what it is, and is ultimately enjoyable.  “I’ll Wait” finds Haikaa digging into a sweet love song that could have serious commercial potential if it gets airplay or other exposure.  From the sweetly honest affirmation of love to the wonderfully constructed pop arrangement and memorable melody, all the elements of a great pop ballad are here.
“Vision” shows off a slightly more mature sound from Haikaa.  She captures a Stevie Nicks vibe here, although you can understand everything she sings.  There’s something of an edge to this number that shows avenues Haikaa may follow on future albums, but the vaguely sensual sweetness that runs through the album survives even in this maturing sound.  Work Of Art winds down with “You And Me”, a solid love song with good energy and approach.  It’s a good effort, but not as strong as much of what’s come before, and perhaps not the best way to say ‘until next time’.
Haikaa shows talent, maturity and youth on Work Of Art.  She is a compelling young songwriter with a real gift for melody and pop construction.  That’s not to say everything works perfectly on Work Of Art, but Haikaa is on-target most of the time, and occasionally delivers moments of brilliance.  The most compelling aspect of the album is Haikaa’s voice, which is mainstream enough to fit in on pop radio dials, but unique enough to stand out.  Don’t be surprised if Work Of Art is just the start for Haikaa.
Rating:                  4 Stars (Out of 5)
Learn more about Haikaa at www.haikaa.com or www.myspace.com/haikaa.
\
Posted by Wildy at 6:00 AM