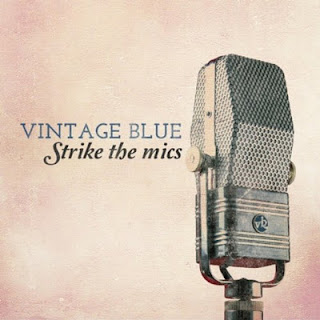 
Every band hits that point where they either break down or break through.  Chicago quintet Vintage Blue hit that point in early 2010, and flew through the barriers like a speeding bullet.  Formerly known as Tanglewood, Vintage Blue went through personnel and stylistic changes, first noted on their 2010 debut EP, California Road.  Vintage Blue’s second offering, Strike The Mics, due out on Valentine's Day in 2012, finds the band picking up where they left off on California Road.  Coming into the album with no stylistic preconceptions, Vintage Blue had remade themselves in the tradition of great rock n roll.  Ben Bassett (vocals, lead guitar); Ryan Tibbs (vocals, rhythm guitar, harp); Will Crowden (drums); Cesar Corral (bass, vocals); and Matt Zimmerman (sax, keys, vocals) enlisted the help of producer Jamie Candiloro (The Eagles, Ryan Adams, Willie Nelson) to help them narrow their musical focus.  Consequently, Strike The Mics is the band’s most vibrant and enduring work to date.
Drawing on a wealth of influences and sonic palettes, Strike The Mics is a cathartic experience.  The album kicks off with the horn-laden blend of classic and alternative rock that is “Set You Free”.  Featuring the sort of chorus that sticks in your head, this song is a great introduction for the band, and the sort that could launch a pleasant association with commercial radio.  “Unchained” is a high-energy rocker at full gallop.  Strong vocal harmonies and a modern rock feel complete the sound in a number you’ll find it impossible to simply sit through.  Vintage Blue strips things down for the start of “California Road”, building into a fuller sound that’s melodically pure and well constructed.  The simple chorus is easy to sing along to, and you’ll find it recurring in your head once you’ve heard it.
“Speak” is funky folk/rock with a funky back beat.  The chorus sounds like it could have been written by Rob Thomas of Matchbox 20, and it wouldn’t be surprising to see this song embraced by commercial radio programmers.  Vintage Blue has shown flashes of Americana influence throughout the album, but that influence breaks free on “Sleep On This”, a down-home rocker about being in love with an ever moving target.  The song is incredibly catchy, with a pop sensibility that simply won’t quit.  “Here To Stay” digs more into Vintage Blue’s emerging country/rock sound amidst a laid back sound and a big chorus you won’t soon forget.
“Just Breathe” is a smooth, classic-rock power ballad with refinement, originating more from a working-class rock lineage than the glam rock sound that so often characterizes classic power ballads.  This is the highlight of the album, both compositionally and instrumentally.  The guitar work is primo, and the vocal harmonies absolutely click.  “Help Me See” is one of those quietly catchy tunes that sneak up on you.  Solid on the first listen, but it will grow on you with each successive pass through.  Vintage Blue sounds like a cross between Toad The Wet Sprocket and Wilco here, displaying the mellow pop sense of the former and the full Americana influence of the latter.  “Great Divide” is an “Ah” moment; a forlorn love song built around a lovely finger-picked guitar core.  Do not be surprised if you end up with this number on repeat.  Vintage Blue bows with “True”, a musical epilogue that plays like the closing credits for a movie.  Catchy and upbeat, this song will get stuck inside your head and stay there.  The horns come back here and support a sound that’s danceable and pop-radio friendly while showing some songwriting substance all at the same time.  This should be a concert favorite; and in an era where great pop music was truly appreciated this would be a top-10 hit on the radio.
Vintage Blue does so much well on Strike The Mics that it’s difficult to summarize.  Ranging from singer/songwriter balladry to classic rock to modern rock and alternative, the band is eclectic in its range and songwriting talent.  Vocalists Ben Bassett and Ryan Tibbs are both capable front men, and the band plays with an energy and chemistry that are absolutely undeniable.  Vintage Blue has managed to take the core experience of the band’s history and mix it with new energy and new blood to come up with a winning rock and roll formula.  In another era these guys would be mega stars.  As it is, this is the sort of band you don’t soon forget.  A live show is bound to be an experience you won’t forget, and Strike The Mics is likely to become a treasured and oft-played part of your collection.
Rating:                  4.5 Stars (Out of 5)
Learn more at www.vintagebluemusic.com.