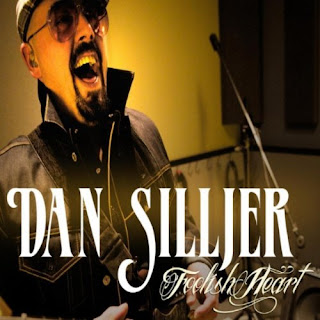 Dan Silljer – Foolish Heart
2012, Soccer Mom Records
Dan Silljer gets funky on his debut solo album Foolish Heart, blending 1970’s soul, R&B and funk with a distinctive ear for melody.  In the process the member of Jason Plumb’s band The Willing creates a collection of highly listenable original tunes.  Silljer’s voice is smooth and soulful throughout, transitioning adeptly back and forth between soul /funk influenced rock and roll and his singer/songwriter roots.


“All But Over You” is AM pop radio gold, circa 1981, and shows a distinct talent for lyrics in addition to composition.  Silljer displays a classic pop touch on “Foolish Heart”, swinging the beat in a gentle ballad that maintains high energy while keeping its cool.  Tower of Power style horns come to life on the guitar-driven “Unfaithful You”, accented by some Stanley Jordan-esque guitar work.  Silljer slows things down for the soulful and swanky “One More Dawn” before launching into the elemental funk and roll of “Them Changes”.  This is easily the most danceable track on the album – you simply won’t be able to sit still.
“Sanctuary” settles into a solid groove, while “Strange Relationship” marks a funky, classic-rock sound circa 1975.  The blues roots of this number show through, and Silljer digs into the vocal line with gusto – laying everything on the line.  Things get smooth on “Cradle To The Grave” a solid old school pop number that’s pure Billboard material.  Silljer then takes on Marvin Gaye’s “How Long”.  It’s always a risk when an artist takes on an iconic song from an iconic artist, but Silljer succeeds with a funky/smooth sound that’s classic and fresh at the same time.  “’Til I’m Gone” mixes soul and Americana (or Canadiana, if you will) in a down-tempo number that’s melodically pure and steeped in the blues.  This is a great piece of songwriting and is delivered with a quiet sense of urgency that is pleasantly surprising.  Foolish Heart bows on a quiet note: just Silljer and guitar on “Fall Apart”.  While the album is high quality throughout this is Silljer’s finest moment: showing he has the musicianship, voice and charisma to hold a listener’s attention without any frills added.


Dan Silljer may spend a lot of time in the background as a member of Jason Plumb And The Willing, but he is a first class front man in his own right.  This fact becomes more and more apparent he wends his way through Foolish Heart.  Dan Silljer shows off his many musical facets with quiet confidence and just a touch of flair.  Foolish Heart is an album you simply don’t want to miss.
Rating: 4 Stars (Out of 5)


Learn more about Dan Silljer at Soccer Mom Records or on Facebook.
Posted by Wildy at 6:58 AM