Kati Mac - Save Me From Myself 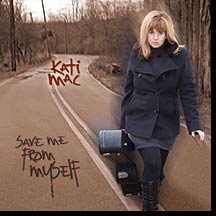 Kati Mac – Save Me From Myself
2012, Kati Mac
With five EMMY nominations, and stints as a backup vocalist for performers such as Meatloaf, Nona Hendryx, Sting and Michael Bolton, you would think that Kati Mac would be a household name.   If you’re a fan of daytime soap operas you’ve certainly heard some of Kati Mac’s original music.  In fact, her song “Only Love” was the final theme for long-time CBS soap The Guiding Light.  Kati Mac continues to produce her own original music from her home base in New York City.  Her most recent effort, Save Me From Myself, is a wondrous mix of folk, rock, Americana and blues, and features a guest appearance from the one and only Jeff Golub.


Save Me From Myself opens with the title track, a sleep bit of bluesy folk/rock that established a rich feel for the album.  Kati Mac is not overpowering vocally, but she has a pleasant voice and a sense of presence that is commanding.  She owns this song, imbuing it with a sense of urgency that is palpable.  “Bullet Hole Road” is the catchy and dark tale of a desperate life laced with impressive guitar work.  The subject of the song is an outlaw, though not a bad person.  The moral here is that a person’s story is often more than just the sum of their actions.  It’s a great story song, and Kati Mac wraps a rich and fluid arrangement around it all.  “He’s Memory To Me Now” is a quiet ballad looking back at a relationship from the past.  There’s a sense of hope that pervades the song, but that hope is mixed with a deep sense of resolution that things simply are what they are.
“Been There Done That” is a catchy blues rock kiss-off song with style and a bit of cheek.   This highly entertaining turn shows off Kati Mac’s sense of humor in the context of finely crafted lyrics and a brilliant arrangement that wraps around it all like a shawl.  “The Wheels Go Round” is a solid country/blues number with a healthy jaunt to it.    This leads into “Times Like These”, a down-tempo ballad that features some of the best guitar work on the album.  Kati Mac is a bit exposed vocally on this tune, but manages a solid vocal regardless.


Kati Mac trots out Blind Faith’s “Can’t Find My Way Home” for a run around the block, building wonderful tension into the song while offering up a knockout vocal performance.  She then launches into another kiss-off song in the form of “Cold Day In Hell”, this time chiding  former love that is looking to get back into her life.  Listeners will hear shades of Bonnie Raitt here; it’s a fun tune that you’ll revisit again and again.  Kati Mac struggles a bit with pitch on “I Won’t Get Back Up”.  The vague malaise carries through to “Highway 100”, this time not in pitch but in the form of a middle of the road ballad replete with melancholy.
Kati Mac lights up the room with “Lord Have Mercy On Me”, a bluesy folk/rocker about being unable to help herself in the presence of a heartbreaker of a man.  The song it entertaining and raw, and she does lose a bit of vocal composure on the high notes.  It’s unclear whether this is by design or simply caused from Kati reaching beyond her comfortable range.  “If I Knew Then What I Know Now” is a solid lament on the past and things that might have been different.  Kati Mac sings from the heart here; the result is a compact tune with a fine arrangement and a powerful sense of emotional momentum that is hard to ignore.  Kati Mac winds things down with an acoustic take on her cover of “Can’t Find My Way Home”, this time with Jeff Golub putting in a stellar guest appearance.


Kati Mac is in the zone on Save Me From Myself, blending stellar songwriting, adept vocals and a wonderful compositional sense that draws the listener in and holds you in place.  There a couple of songs here where she pushes her own vocal range with mixed results, but one the whole Save Me From Myself is a splendid effort.
Rating: 4 Stars (Out of 5)

Thanks for the reviewBTW, Wildy!
My pitch was intentional on "I won't get back up". I sang in the spirit of a broken soul. ;) I'm just sayin.
Thanks again.
XO
Kati