Jennings - Take It Or Leave It 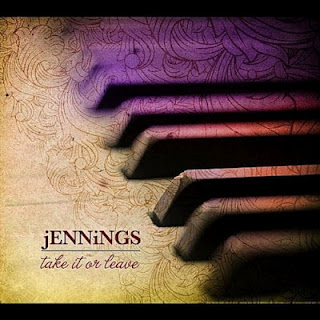 Jennings – Take It Or Leave It
2012, Mary Jennings
If you were to meet Mary Jennings on the street, you would find her to be sweet and full of light. Standing just a hair over five feet tall, Jennings possesses the charm and grace of the archetypical girl next door.  Stepping on the stage to perform, Mary Jennings sheds her first name and transforms into a powerful, emotive singer/songwriter you might never have imagined from the first meeting.  It’s not so much a contradiction as reminder to not judge a book by its cover.  Jennings’ stage metamorphosis is stunning, and surprisingly well captured on her latest effort, the live album entitled Take It Or Leave It.


Jennings kicks off the album with “Doorway”, using her musky voice to full effect.  The song is a mixture of dark and light, wending its way through decisions while beckoning both success and tragedy.  The stripped down arrangement is affecting and pretty, and has a disturbing undercurrent that keeps listeners on the edge of their seats.  “Kaleidoscope”, written on a dare, explores the atomic nature of life, with events and people running together and creating unintended consequences.  The song reaches deep into the bag of metaphor and comes out a winner.  “Falling Higher” explores the juxtaposition of falling in love and moving higher into the emotional spectrum.  This is an amazing immersion in song, full of emotion, deep thoughts and amazing musical color.
“Move” is an exploration of the emotions surrounding the death of Jennings’ mother, and is accompanied here with an explanation of how it came to be.  Jennings is at her most elemental here, delving deep into the shattered psyche of a heart broken by grief.  The mix is beautiful and tragic all at once, and Jennings lets the song pour out of her like a torrent.  “Figure Me Out” is deeply personal and raw, skating the juncture where a crush becomes equally a boon and a burden.  Jennings’ explanation gives the song a happy twist as well, but I won’t ruin the surprise here.


“Cling To Me” is another deep emotional dive; an offer of succor and love in a friend’s darkest hours.  Jennings croons from her heart here, showing all the colors and shadings of her emotive voice.  “Surrender” digs at the motives of a friend who just never gives in, fighting to be right even when all the evidence is against them.  Jennings punctuates her frustration with the piano, redressing the ills with a voice that bleeds psyche, love and regret.  Jennings says goodnight with “Take It Or Leave It”, a pop singer/songwriter turn that thrives in the arpeggio-laden piano that drives it.  Even in the live setting, this song is radio-ready; highly emotive yet compact and well-written.
Mary Jennings knows how to deliver a song.  Her highly personal and emotional singing style is raw and captivating.  It’s the sort of performance that keeps audiences rapt with attention; leaning in toward the stage do they don’t miss a thing.  Take It Or Leave It captures the energy and power of a Jennings performance for those who haven’t been lucky enough to see her live, or for those who have and want to recapture the moment.  Don’t miss this album.
Rating: 4.5 Stars (Out of 5)