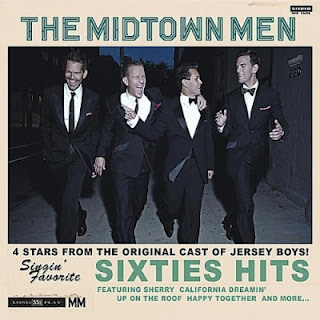 The Midtown Men – Sixties Hits
2011, The Midtown Men
Broadway musical casts are forever changing.  Principal actors move on to other projects, or come to disagreements with the powers that be over the value of their performances to the show.  Whatever the reason, the Great White Way is a revolving door.  The Jersey Boys was one of the most wildly successful rock and roll inspired shows of the last decade.  The original cast of that show has moved on, but they haven’t stopped performing together.  Working now under the name The Midtown Men,  Christian Hoff, Michael Longoria, Daniel Reichard and J. Robert Spencer continue to deliver their brilliant early rock and roll sound as they tour the U.S.  The Midtown Men’s debut album, Sixties Hits, finds The Midtown Men picking right up where they left off at the final curtain call of The Jersey Boys.
Kicking things off with a medley of “Let’s Hang On/Working My Way Back To You/Breaking Up Is Hard To Do”, The Midtown Men sound like they have been transported forward forty years without missing a beat.  The sound is wonderfully clean and professional, and the vocal harmonies are as right as a wire.  There is a hint of Broadway/Vegas flair to the entire affair, but the sound is very faithful to the early 1960’s sound they are trying to capture.  “Can’t Buy Me Love” brings a bit of surf influence into the classic Beatles tune, subtly changing the character of the song without breaking its musical heritage.  This is one of the sharpest interpretations of the album, one you will likely have on repeat.
The Midtown Men then launch into “Happy Together” as if they wrote it themselves.  This time out the sound, perhaps, a bit too polished, but it’s a minor complaint.  They sound absolutely brilliant.  “Ain’t That Peculiar” is solid space filler, but leads into the aural gold of “Dawn”.  The vocal harmonies here are beyond sublime, tightly wound and perfectly executed.  “Dawn” is truly a thing of beauty.  “Candy Girl” plays in a similar sonic playground, although the Midtown Men are a bit looser with their sonic affections this time around.  This one will have you wanting to dance a bit.
“Up On The Roof” gets a modernized, slick treatment that sounds likely to get the Midtown Men some airplay, but doesn’t necessarily go as well on the song.    It’s the sonic equivalent of trying to paint antique furniture with modern acrylic paint.  It might look nice but it just doesn’t fit.  The Midtown Men hit a homerun on “California Dreamin’” however finding the perfect mix of rough and smooth in the sound.  The lead vocalist is on the edge of nirvana throughout this performance, nailing not only every note but the feel of the song as well.
“Time Of The Season” underlines the group’s vocal prowess as they work their way through some interesting modal harmonies in the arrangement.  The performance is absolutely gorgeous and worth waiting for.  “Big Girls Don’t Cry” is an almost perfectly bubblegum replica of the original, and promises to be a great deal of fun live.  The Midtown Men wind things up with a wonderfully buoyant take on “Bye Bye Baby”,  the perfect curtain call for the album.
The Midtown Men might not be able to trade under the name The Jersey Boys anymore, but if you loved the original Broadway production then you won’t be able to resist Sixties Hits.  In spite of a couple of mall side trips, the album flows brilliantly from song to song, with a level of sonic perfection that’s difficult to attain with even the most stringent electronic reworking of vocals.  There’s none of that here.  The Midtown Men are just solid gold.
Rating: 4.5 Stars (Out of 5)
Learn more at www.themidtownmen.com or www.facebook.com/themidtownmen.
Posted by Wildy at 5:00 AM

I have been browsing online more than three hours today, yet I never found any interesting article like yours. It’s pretty worth enough for me. Personally, if all website owners and bloggers made good content as you did, the web will be much more useful than ever before