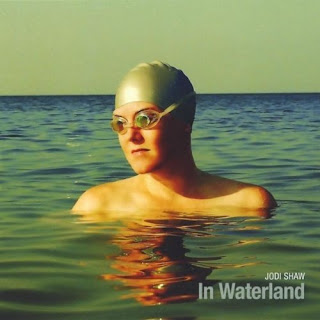 Jodi Shaw – In Waterland
2012, Jodi Shaw
Jodi Shaw has always been a bit off the beaten path.  The Canadian-born, self-taught singer songwriter transitioned to songs from poetry, finding that her aural and lexemic muse flowed freely together.  In 2009, Shaw teamed up with fellow Canadian Malcolm Burn (Daniel Lanois, Emmylou Harris, Patti Smith, Bob Dylan, Blue Rodeo) to record her latest album, In Waterland, her most accomplished work to date.  In Waterland (due May 5, 2012) took a long time to make it out into the world.  Partway through the creative process, Shaw discovered she was pregnant.  After the birth of twins, she took some time off from music, but returned to complete the album.  Shaw’s poetry and musical sensibilities intertwine to near perfect on In Waterland, a deeply personal and moving experience that is as subtle as the current, and as deep and unbending as the tide.
Kicking things off with “Swim”, Shaw sinks into a sparse and gorgeous musical medium that flows as freely as an ocean current.  Shaw’s voice is incredibly warm, falling somewhere between the edgy depths of Tori Amos and the enigma that is Leslie Feist, with a touch of Fiona Apple’s edge thrown in.  Shaw goes for shock and awe in “The Witch”, assaulting listeners’ preconceptions full on with deep and esoteric musings on the mutability of beauty.  This could be a message from mother to daughter, perhaps, but it explores the essence of beauty as opposed to the often bollixed perceptions of the world.  This is a wow moment for Jodi Shaw, both as a writer and a performer.
Shaw doesn’t waste time offering up another wow, digging deep for Jack & Jill with ruminations on imperfection and love, and how they interrelate.  Shaw builds offsets her vocal affect with a simple and sparse arrangement that draws equally on the twin beauties of the sonic and silence.  Down through these currents to a more carnal side of human nature, Shaw digs in to “Mystery Of Love”, an utterly poetic yet in your face come on.  There is more here than meets the eye/ear, however, as Shaw shows that even desire has many levels.
Shaw gives listeners a breather with “To The Country (We Go)”, a solid transition that sets up the fantasy/reality of “This Balloon/Ode To Zvezdochka”, a tribute to the last Russian dog cosmonaut, if you will.  Think of this as art deco philosophy, driven in time and place by thought that is not trapped by time frame it captures.  “Fortunate Prince” is once again solid, setting the stage for the utter beauty of the title track, “In Waterland”.  Here Shaw paints with a broad brush, in poetic and graceful strokes that go much deeper than the surface.  Shaw explores the connections we make, the loneliness we feel, and the occasional bits of magic we encounter along the way. You’ll find yourself playing this song again and again; plumbing its depths for deeper meaning that is always just out of reach.
In “Hell’s Bells”, Shaw explores the confusion and pain of being taken in romantically by someone whose intentions aren’t as pure or open as your own.  Shaw leaves no emotional stone unturned, exploring the depths and of personal disgrace in both lyrics and music.  In Waterland closes by turning the game around on those who would toy.  In “Fellas”, Shaw is the huntress and the boys are expendable.  You might expect a tongue in cheek nod here, but if there, it never quite becomes apparent.  It’s a powerful close, one that creates its own suspense without ever answering, or even asking, a question.
It’s a cliché, perhaps, but In Waterland is a revelation.  Jodi Shaw creates music like a master painter creates art, with each single stroke building to something beautiful, ear-catching and raw.  The album is nothing short of sublime, leaving rote ideas and musical schemes by the wayside, in favor of raw honesty, and a musical purity not often approached in popular music.  The same melodic magic that Sarah McLachlan is capable of is here, but in more subtle and vaguely darker tones.  At the same time, Shaw exudes the edge of Amos, Apple and Feist.  The album is nothing less than stunning, a Wildy’s World Certified Desert Island Disc for certain.
Rating: 5 Stars (Out of 5)
Learn more about Jodi Shaw at www.JodiShaw.com or www.myspace.com/jodishaw.  In Waterland makes its way into the world on CD on May 5, 2012.  For those of you who prefer to rent your music, it's already available as a download through the etailers below, as well as through the Wildy's World Amazon Store.

Please note that the Amazon.com prices listed above are as of the posting date, and may have changed. Wildy's World is not responsible for price changes instituted by Amazon.com.
Posted by Wildy at 8:19 AM