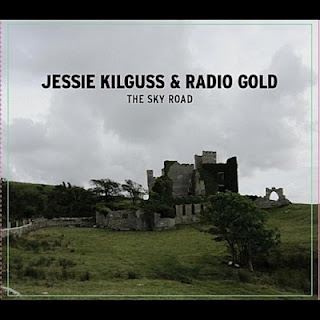 Jessie Kilguss & Radio Gold – The Sky Road
2012, Jessie Kilguss & Radio Gold
Jessie Kilguss didn’t plan on being a singer/songwriter.  The classically trained actress was one of the afflicted girls in the screen adaptation of The Crucible starring Daniel Day-Lewis and Winona Ryder, an her training at NYU’s Tisch School of Fine Arts and Webber Doublas Academy of Dramatic Art in London had Kilguss well on her way to a successful acting career.  In fact, it was an opportunity to share the stage with Marianne Faithful that opened her eyes to a new world; a world in which Kilguss could be in creative control.  Switching gears, she began writing her own songs.  After two albums and a lot of gigs, Kilguss took her band Radio Gold to Ireland to record her third effort, The Sky Road.  Talk about transformations – in a few short year Kilguss has gone from a fledgling singer/songwriter to a highly capable artist who create moments of musical magic.
The Sky Road opens with “Take Me To The Ocean”, a rock-a-by pop song with escapist intentions.  The call of the ocean – of boundaries an what might beyond drives this wonderfully melodic tune.  Kilguss’ voice is as amooth as a placid pool but full of hidden, roiling depths.  “Counting Sheep” is a quirky little pop number about struggling to do the right thing in the long hours of the night.  This song manages to deal with deep and raw emotions that can never be smoothed over while maintaining a high polish.  On “Down The Line” Kilguss takes a melancholy look forward at the past in a soliloquy on the one who won’t stop haunting her thoughts.  This quiet an contemplative moment is full of angst, reverie and regret.
Kilguss gets medieval in “Die Dog Or Eat The Hatchet”, a dark but catchy tune full of animalistic aggression.  The juxtaposition between the darkness of the subject matter and Kilguss’ whiskey-smooth voice is compelling.  Radio Gold ads a sense of machismo to “10 Stories High” with some muscular yet reserved guitar work woven into a song of desperation.  Kilguss digs in with both hands and both feet, staying cool on the verses but showing a real egy mien on the chorus.  “The Sky Road” is amusical landscape, painted in notes, rests and serene timbres.  Kigluss shines in a moment of beauty by getting outside of herself and making the magic and mystery of childhood places the heart of this song.
"Gun Shy” is a relationship mea culpa, experiencing hesitation after a life full of impetuous decisions.  The authenticity here is impossible to ignore, as Kilguss wraps her story in a wonderfully catchy alt-pop gemthat has hit single written all over it.  “Keith & Anita” is a relationship post-mortem on a couple who only knew who to get along by fighting.  The song is well-written and souns like it badly wants to be a country tune. It works well here, but may have some stylistic development yet in the live setting.
“Riverboat Gamblers” is a road song transplanted to the Mississippi River; a omance of times gone by and a life of adventure of the sort that informe Mark Twain’s novels.  The song is incredibly catchy, a mix of classic R&B an Americana that’s quietly infectious.  Kilguss gets mellow on “Ringleader”, a melancholy rumination on power in a relationship.  Kilguss fins a true ‘wow’ moment here, both as a songwriter and singer.  Her voice is magically pure in this moment, as the dark underbelly of the song only slowly becomes clear admidst the sorrowful keening of a steel guitar.  Kilguss says goodnight with the twangy country rocker “Tennessee”.  It’s a horror movie in song; full of dark and light and a delightful story teller’s sensibility.  Kilguss’ sense of imagery and irony here is entertaining, especially as you through the layers of her story.
Jessie Kilguss continues to learn and grow as a songwriter, but has finally transcended the line where her artistic talent becomes self-feeding.  The Sky Road is redolent with that mix of good intentions and bad deeds that defines humanity, and mixes a strong sense of melody with a darkly disjointed compositional style that is both appealing and occasionally jarring.  The Sky Road offers songs of consistent quality spike with flashes of brilliance, and it’s hard not to think that Jessie Kilguss and Radio Gold are just getting warmed up.
Rating: 4.5 Stars (Out of 5)
Learn more at www.jessiekilguss.com.  You can purchase copies of The Sky Road through the e-tailers below! There are CD copies about, but you might need to be at a show to catch one!

Please note that the Amazon.com prices listed above are as of the posting date, and may have changed. Wildy's World is not responsible for price changes instituted by Amazon.com.
Posted by Wildy at 8:38 AM