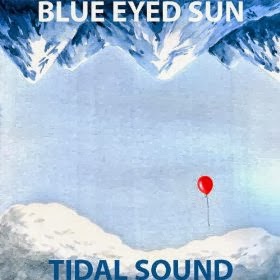 Blue Eyed Sun – Tidal Sound
2013, Blue Eyed Sun
Hailing from the deep woods of Northern Michigan, Blue Eyed Sun is not your typical rock band.  The highly musical trio, comprised of Brennan Leeds (guitar), Kenneth Fox (piano) and Casey Batterbee (drums), comes with high recommendations.  Four-time Grammy winner Michael Omartian once dubbed Leeds the next Paul Simon; Fox had written, self-recorded and produced a 14-track album by the time he was sixteen year old.  Casey Batterbee spent years playing with seasoned jazz veterans, but also brings influences such as Led Zeppelin and the Beatles to the table.  Together, Blue Eyed Sun creates a unique and memorable sound.  Blue Eyed Sun recently released their debut album, Tidal Sound, and it’s not like anything else you’ve heard in some time.


Tidal Sun opens with "Rocco's Song", a quirky bit of folk pop that's catchy in an almost socially backward fashion. Blue Eyed Sun sweep the listener up and carry them along on an irrepressible musical tide here.  "Fidelity Melody" is a hopeful love song that's a conditional promise of faith. The variegated musical topography of the song is a thing of beauty, and the almost geeky social affect of the song is charming.   "Given Name" is an intriguing rumination on the depth of relationships and human need.  There is a melancholy feel here that is palpable.
"Make Friends" is social awkwardness set to a wonderfully angular folk/pop arrangement. Blue Eyed Sun show some progressive tendencies here with guitar and strings, and create a bit of musical magic in the process.   "Johnny Boy" is a lament about a friend who has gone beyond the veil. There's an unfinished quality to the song that seems intentional, resulting in a raw feel. The same aesthetic carries over into "Bucket", which sounds like a mix of Ben Folds and soul/pop. Blue Eyed Soul waxes poetic here on a mix of big dreams and ambivalent direction.
"Please" channels a bit of early Jason Mraz in fuzzy, lyric garage arrangement. The mix is a bit uncomfortable, but Blue Eyed Soul keeps things moving so you don't have time to think about it.  The wheels come off a bit on "Panthers", a languorous and vaguely lost ballad that moves too slow and lasts too long. Neither vocalist in the band has perfect tone, a fact that is generally easy to overlook. In this sort of arrangement the imperfections are too apparent to ignore, however. "Mountains" suffers from a similar malaise, although there is more energy this time around. Blue Eyed Sun closes strong with "Tidal Sound", a swarthy ballad with a positive message. The boys of Blue Eyed Soul aren't afraid to change things up and do the unexpected, and here they exchange lyricism, angry rants and moments of true beauty all in the same song.
Blue Eyed Sun blend folk, rock ‘n’ roll and progressive elements with a fine musician’s ear for detail on Tidal Sound.  The songwriting and arrangements are often raw and emotionally driven, with all of the imperfections this implies.  More often than not this works for the band.  The unpolished voices are refreshing, although over-exposed on a couple of songs.  Blue Eyed Sun is here to stay, however, marking their own trail out of the musical wilderness.  It’s one you’ll want to follow.
Rating: 3.5 Stars (Out of 5)