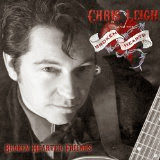 
Chris Leigh was born and raised in Kentucky, the eighth of ten children in a devout religious family.  As a teenager Leigh broke the mold, hitch-hiking to California to try and make it in the music business.  Returning home to Kentucky several years later, Leigh settled down to family life and a 9-5 job.  After eighteen years Leigh’s marriage came to an end, and he picked up his guitar again to try and make sense of it all.  What started out as therapeutic has become cathartic, with Leigh diving back into the music world with some of the edgiest classic-country music being made today.  Chris Leigh’s debut album, Broken Hearted Friends, is ready to take the country music world by storm.


Leigh kicks things off with the title track, an amusing piece of tragic-comedy about heartbreak turning into camaraderie.  Leigh manages to create a bit of classic sounding country with a rock and roll flavor that’s very appealing.  “Broken Hearted Friends” feels like an instant hit.  “Like I Love You Forever” is an optimistic love song that wastes no time getting to the point.  The chorus plays more like a bridge in this anachronistic little tune, but Leigh catches and holds the listener’s attention with an original style and a catchy backbeat.  Leigh plumbs the depths of country heartache on “If You Make It to Heaven”, with the caricature of a man struggling with issues of loneliness and faith.  It’s a well-written tune that’s more about the human condition than about any particular religion, and offers keen insight into the struggle to find happiness.


“Ramblin’ Man” finds Leigh telling a cautionary tale about life on the road and temporary liaisons.  One particular liaison with a southern belle turns into a nightmare for the protagonist here, and Leigh soups up the experience with a breakneck arrangement that you simply can’t sit still through.  “Heartache and Misery” bemoans a man’s tendency to fall into relationships with no future; a classic country tale of romantic woe set to a killer arrangement.  The guitar licks here are so sharp they are dangerous, culled as they are from the Chet Atkins school of guitar.  Honky-tonk piano takes the lead on “Who’s That”, a diatribe on his sweetie finding a new Facebook friend.  Leigh brings country music thematically into the digital age with a classic arrangement that’s as tight as can be.


“Money” explores material wealth as a relationship with a flighty partner, as bad decisions lead to expected results.  Everyone but the narrator can the inevitability of the outcome in this story song, flipping the tragic with the nearly comic.  “Here We Go Again” is a kiss off song based on a partner’s tendency to hook up his friends.  No matter how many times it happens he keeps taking her back, only to be surprised when she strays again.  The guitar work here is excellent, as Leigh crafts a near-perfect 2 ½ minute piece of old-school country-pop.  “The Ballad of Bobbie Sue” is a languorous lament, clocking in at 5:39.  Heartbreak is the central theme here, with her heartbreak become his with time.  Leigh closes with the rockabilly strains of “Whiskey River”, which is a thematic cousin of the Willie Nelson song of the same name.  The tune is as catchy as you can ask for, with a chorus that will stick in your head for days.


Chris Leigh & The Broken Hearts mine a classic country sound with well-written songs and an enigmatic lead vocal style that will sit well with modern country radio while also pleasing fans of traditional country.  It’s hard to imagine CMT and other major outlets not catching on to Leigh’s sound and making him a star, but stranger things have happened in the music business.  If the sound on Broken Hearted Friends is any indication, you need to catch Leigh’s act live if he comes to your town.  Elements of Garth Brooks, Hank Williams Jr. and Luther Wright blend here to make what should be a knock-out live performance.  As it is, you’ll be playing Broken Hearted Friends again and again.


Learn more at www.chrisleighmusic.com.
Posted by Wildy at 7:32 AM