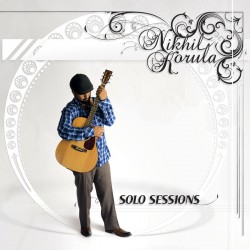 Nikhil Korula – Solo Sessions
2013, Nikhil Korula
Nikhil Korula is a classically trained vocalist and songwriter who spent several years immersed in the west coast jazz scene.  This exposure helped Korula to network with the current members of his Nikhil Korula band.  With several Triple-A singles and relentless touring, the Nikhil Korula band have built an international following.  Gigs with artists such as John Mayer, Jason Mraz, Dave Matthews Band, O.A.R., Tim Reynolds, Les Claypool (Primus) and Colin Hay (Men At Work) have served to build the band’s fan base as well as influencing the band’s sound.  Now Korula steps out on his own with The Solo Sessions, a five song EP that shows off his dulcet voice and his unusually smooth songwriting style.
Korula opens with “Spark”, a poppy and positive number with influences from Dave Matthews and Earth, Wind and Fire.  Korula gets in the listener’s head here with a rhythmic arrangement that you’ll be singing for days, as well as an upbeat message that leaves the listener with a positive feel.  “He Said, She Said” sounds like it could be a Dave Matthews Band outtake.  The mellow feel is thematic, right down to the occasional sax trills, and Korula even seems to channel Matthews vocally here.  It’s a well-written tune that might be a bit too sound-alike for some, but it’s very much worth a listen.  Korula ends up sounding a bit like Darius Rucker on “Broken Roads” with a sound that falls somewhere between his early work with Hootie and the Blowfish and his country material.  “Broken Roads” is a contemplatively melancholy tune, and Korula brings out the best in his voice.  “Silent Tears” keeps the same aesthetic in another moment melancholy piquant.  Strings in the arrangement offer lovely shading, and the chorus has a sing-song quality that you will carry with you.  Korula says goodnight with “Fade Away”, a mid-tempo rocker with a message about not giving up.  This is a nice choice for a closing tune after the melancholy of the two proceeding songs, and leaves listeners with an optimistic feel that will bring them back.
Nikhil Korula is undoubtedly a talented vocalist with a supple voice that allows him to take on several sounds across an album or EP.  This can be both beneficial and detrimental with music fans, but even if you find the sound derivative you have to acknowledge he’s good at what he does.  The material on Solo Sessions is first class, and Korula fills up each song with an ultimately capable voice and a boat load of charisma.  This is an EP you will find yourself returning to again and again.  And Nikhil Korula is one lucky break from being a household name for many years to come.
Rating: 5 Stars (Out of 5)
Learn more at www.NKband.com.