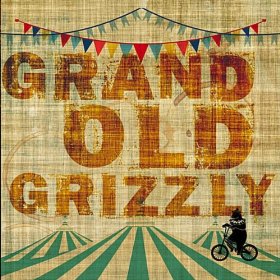 Grand Old Grizzly – Grand Old Grizzly
2012, self-released
Grand Old Grizzly is a Houston, Texas quartet that originally came together as the backing band for Katie Stuckey.  Sporting a Lo-Fi aesthetic and a tell-it-like-it-is songwriting style, lead vocalist Will Thomas writes like Johnny Cash and sings a bit like Jakob Dylan.  Grand Old Grizzly has opened for Leon Russell and Blackberry Smoke, and The Houston Press has already branded the band “The Best New Act” in town.  Grand Old Grizzly’s self-titled debut album invokes thoughts of Wilco, Tom Petty and The Old 97’s, and it’s easy to imagine them as a national headliner in the near future.


Grand Old Grizzly kicks things off with the urgent energy of “The Mad Ones”, a frenetic alt-country story of a lover gone astray.  This ramshackle runner turns into a kiss off song in the end, but Will Thomas makes a fun little journey out of the song.  “The Sundowners” is a sweet little number with rockabilly in its roots.  This is a relationship with some gas in the tank yet, and the focus is all on making it work.  “Indecision” shows a bit of Grand Old Grizzly’s wry wit in exploring an inevitable relationship meltdown.  The easy going arrangement make this a quiet draw, but this tune will get stuck in your head.
GOG moves into the middle of their debut with a series of solid songs that form the timber of any album.  “Morning”, “Tallahassee”, and “I Was Thinkin’” are all accomplished album tracks that flesh the album out into a full-length recording.  “Marvelistic Coward Band” finds Grand Old Grizzly’s wit rising to the surface once again in a low-key story song that’s nonetheless entertaining.  There’s a comic-tragic element here that’s very subtle but difficult to ignore, and the band drives home the monotony of the life described with a loop-style Americana arrangement.


“Approaching Cars” is a quietly banjo-fueled tour-de-force, a story of desperation and loneliness is compelling.  “Lament” is a subtly crafted bit of magic.  Songwriter Will Thomas proves his depth here, and Grand Old Grizzly bring the song to life with an understated beauty.  “Pretty Little Head” starts out well enough but gets a bit rushed in the chorus.  The two song components are disparate in sound and feel, and this is the only song on the album that just doesn’t seem to work.  GOG recovers well with the closing track, “Blue Irish Eyes”.  Thomas finds a sense of desperation and impending loss here, conveying the fear of loss and the sense of holding on with a delicate urgency.
Grand Old Grizzly works both in spite of, and because of its imperfections.  Will Thomas is a compelling songwriter with an enigmatic voice.  That voice won’t work for every listener, but is a perfect match for Thomas’ low key, narrative singing style.  The band around Thomas is top-notch, never doing too much or too little to flesh out the songs.  Grand Old Grizzly is the quintessential Americana band: no glitter and no gloss with some cracks in the proscenium, but consistent in providing quality songs that take you on a journey to someone, somewhere or sometime else.  You’ll find yourself getting more hooked on Grand Old Grizzly with each successive listen.


Rating: 4 Stars (Out of 5)
Learn more at www.grandoldgrizzly.com.