Ben Folds Five - The Sounds Of The Life Of The Mind 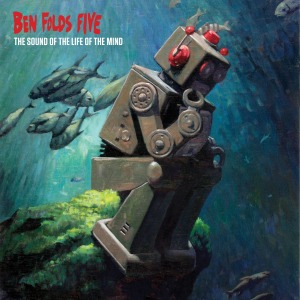 The album kicks off with Folds at his emotionally disaffected best on "Erase Me". A bit removed from the angrier songs if his youth, "Erase Me" finds Folds mining a mix of anger, heartache and knowing resignation as he confronts his co-pilot in a downward arcing relationship. "Michael Praytor, Five Years Later" finds BFF rocking out in classic fashion in interludes between Folds' classic storyteller verses. Folds gets contemplative on "Sky High", one of the pat aesthetically and lyrically pleasing compositions he has recorded to date.

Folds has always had a distinctive for capturing people and places in song in ways that bring them to life for the listener, but he outdoes himself on "The Sound Of The Life Of The Mind". This portrait of a young lady who escapes from the banality of her high school life through intellectual pursuits is surprisingly adept. Folds ability to tell her story both from within her thoughts and in the third person simultaneously is masterful. Likewise "On Being Frank", which a melancholy look at Sinatra's legacy as seen from the eyes of one time fanatic and now disillusioned fan. The composition is fully orchestrated and beautiful, reflecting back the sadness in the vocal line.

"Draw A Crowd" could be a take on the narcissism of artists who will do anything for attention. Regardless if your interpretation it's a hilarious take on the need for attention, wrapped in a wonderfully snappy pop arrangement. "Do It Anyway" is a piano-driven rock ballad about making hard decisions. There is an interesting dichotomy in this song, which initially sounds like an ode to immaturity but actually tackles the decision of whether to end a relationship from a surprisingly adult perspective.

Hold That Thought is wonderfully melancholy and melodic. The piano drives this along with a vibrant if quiet energy, and there is a lonely beauty in the melody that Folds has constructed.  “Away When You Were Here” is a bittersweet reflection on imperfect love and family ties.  Folds is coming to terms with a dysfunctional family relationship that is no longer reparable and finds the good, perhaps for the first time.  Folds once again explores this sort of imperfection on “Thank You For Breaking My Heart”, a gorgeous piano ballad that finds beauty and growth in suffering.  This song is a powerful statement, punctuated by the occasional use of the piano’s more percussive properties.  It’s a beautiful and poignant close that makes beauty out of sadness.


Ben Folds manages to make a classic Ben Folds album with the help of his original band mates Ben Folds Five.  Maturity and time have smoothed the sound of the trio a bit, but the songwriting is as incisive and original as ever.  The Sounds Of The Life Of The Mind proves that Ben Folds Five doesn’t suck.  I should know.  I have my own blog.  (Kudos to those who get it).
Rating: 4.5 Stars (Out of 5)


Learn more at www.benfolds.com.
Posted by Wildy at 5:00 AM