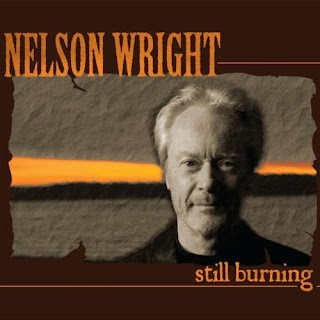 Nelson Wright – Still Burning
2012, Nelson Wright
What can you say about a folk singer whose photo appears on the cover of the classic Woodstock album and whose inventions are in the Smithsonian?  You’re certain to think of much to say about Nelson Wright as you listen to his album Still Burning.  The northeast U.S. native and northwest émigré is thriving in Seattle’s nouveau art-folk music scene.  Wright trades on the currency of well-written songs and artfully delivered stories that bring people, places and moments to life with flashes of intelligence and wit.


Wright kicks off with “Worse Things”, a deliciously bluesy folk love song that recounts all the ways his life could be worse than being with the one he loves.  Wright’s rough hewn voice fits perfectly amidst his rather prodigious guitar riffs, and his sense of humor is somewhere between Lyle Lovett and Randy Newman.  Wright paints a picture of a roadhouse and a young lady looking for a way out in “Five Feet Under”.  If the name implies that something doesn’t quite measure up, the story confirms this as fact.  It’s a tale youth escaping from desolation and pain through music.  The resolution is, perhaps, a continuing story, but there are sufficient tension and potential plot lines to turn the song into a movie.
Nelson Wright displays a unique ability to spin tales in song.  “Time To Choose” takes a slightly different tack, laying out the story of a relationship on the edge in one-sided dialogue.  The vocal lines are accompanied and occasionally broken by some heartbreaking electric blues riffs on guitar.  Angst, anger and pain are wrapped up in each tremulous note as they crash upon the shore of indecision.  “No Second Chances” follows a more traditional folk route, exploring with melancholy air the transitive nature of relationships and the fact that those lost rarely come back.  Wright mixes melancholy and regret here with an almost clinical nature; a knowing observation in song.


In “Red Wing”, Wright recalls a brief liaison from his younger days with sadness: “there are tricks that time can play; the cruelest one is called regret.”  The image of a white sun dress becomes the icon of a magic moment that can never be recovered, but will always live in his mind.  “Burnin’” explores heartbreak from a gritty, dysfunctional perspective.  He’s trying to shake her and knows she’s nothing but heartbreak, but can’t put out the fire inside.  There’s a sense of urgency here that’s palpable, drawn out in the edgy blues/folk guitar work, and little resolution in the end.  It’s a well-written tune that leaves the listener on the edge that the singer seems to feel.
“It Ends With My Longing For You” may well be a continuation of the same story written with the perspective of time.  Where “Burnin’” is in the immediate aftermath and is full of the urgent longing of heartbreak, “It Ends With My Longing For You” is written perhaps years later from a depth of melancholy and understanding.  The contrast of the two songs is appealing, and Wright particularly nails the melody on the latter song.


“February Thaw” is an intriguing little song about unrequited love.  The songwriter falls in love with someone whose heart has been made cold by experience and is simply waiting for the weather to change.  This song is a thing of beauty, written in the plaintive but determined tones of a man who intends to wait out the winter no matter how long it takes.  “Trouble In Mind” tells a story of young love against the backdrop of a vibrant Zydeco-fueled arrangement.  The song is catchy and vibrant, and the dueling guitar and violin solos threaten to rip the roof off of wherever they are played.  After spending much of “Still Burnin’” exploring stories of love lost or faded, Wright finishes off with a story about today.  “Unfinished Business” finds Wright headed out with nothing but a picture of the woman he loves.  His intent; to find her and finished what they once left behind.  It’s a carpe diem song, of sorts, but with a very personal investment.  The song is well-written and full of heart.
Nelson Wright crafts songs born from experience, deep thought, and ultimately, from the heart.  There isn’t a moment on “Still Burnin’” that isn’t somehow tinged with personal experiences.  Wright eschews cynicism and theatrics, focusing on the truths each moment brings as he sees them, occasionally moving around in time to offer different perspectives on the same theme.  The conclusion is that permanence is what we make of it, or as Wright sings, “there ain’t no forever, there’s only never lettin’ go.”  These simple truths are delivered in a mix of arrangements simple and complex, but full of the simple beauty of pure heart.


Rating:  4 Stars (Out of 5)
Learn more at www.nelsonwright.org.