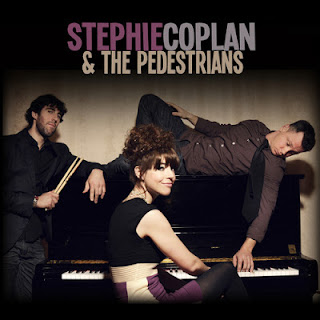 
Stephie Coplan & The Pedestrians kick things off with the aforementioned “Jerk!”, decrying an ex-boyfriend who did not support her dreams, but whom she continues to be drawn to.  Interpersonal milieu aside, this is an incredibly catchy rocker with big commercial potential.  Coplan’s acerbic take on the situation borders on the tragic/comic divide, but there’s real pop punch behind the power chords.  A Ben Folds-style humor/sarcasm informs “Take Me Back To The Suburbs”, a tongue-in-cheek anthem about suburban flight that will get stuck in your noggin.  “Caroline” is a wonderful little biograph in song, capturing the essence of the subject, who manages to be an amalgam of someone we’ve all known.  Perhaps what’s so impressive is the sonic construction and chemistry of the band, which seems to move almost as one organic unit most of the time.
“Make You Mine” is a song of quiet desperation; of subjugating yourself and your own interests to get what you want.  Personally dysfunctional, but the song is incredibly well written and has an overpowering sense of truth/realism.  “We Don’t Need Much” is a beautifully atypical pop/rock love song that gets down to the heart of what love is about.  The stripped down arrangement artfully represents the philosophy of the song, and it’s clear that Coplan and her band think deeply into the creative process to find the art of each moment rather than simply whipping out songs.  The E.P> closes out with radio edits of “Jerk!” and “Take Me Back To The Suburbs”.


Stephie Coplan & The Pedestrians strike a near-perfect balance between pop and rock and roll on their self-titled, debut EP.  Coplan’s voice is reminiscent of Tanya Donnelly, but her writing style is more in line with that of a young Ben Folds.  Stephie Coplan & The Pedestrians is the sort of debut EP that goes out of print when the artist is eventually signed to a major label and one day gets sold as an expensive collectible on eBay.  The songwriting and sound here have a rough-hewn quality that is charming, but what really impresses is Coplan’s musical vision and her ability to turn a phrase that’s both intelligent and witty while creating some incredibly dynamic sounds on the piano.  It’s not surprising that The Pedestrians are anything but; talent like Coplan’s draws talent.  This is a fabulous debut.
Rating:  4 Stars (Out of 5)


Learn more at www.stephiecoplan.com.
Posted by Wildy at 6:30 AM