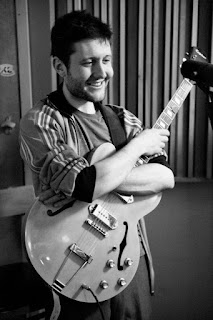 
That is the story line of Elijah Tucker in a nutshell.  Growing up in Washington, D.C., it was the sound of Phish, Rusted Root and the Grateful Dead that turned Tucker onto music.  At the age of twelve he began studying guitar, flute and drums all at the same time.  There was no looking back from there.  Tucker was writing songs within two years, and even collected donations from classmates to buy his first four-track.  He paid them all back by donating proceeds from sales of his tapes to the class trip.  Tucker went on to success at Bard college as a member  of jam bands Mother Ming and TheFoundation, sharing stages with the likes of George Clinton, Brad Meldau, Mercury Rev, The Slip and others.  Fast forward to 2012, and Elijah Tucker is on the cusp of releasing his second solo album, Saturn.  Tucker evokes all the joys of rock and roll on Saturn, but underscores it with a thoughtfulness and maturity that is compelling.
Tucker opens with “Gimme Gimme”, which perhaps could be sub-titled ‘The Narcissists Love Song’.  Delivered in a catchy early 1960’s rock arrangement, the song has a heart of pure pop gold.  “Crazy Things” will make you want to dance.  Tucker pulls out elements of classic soul and funk, and accents it all with a horn section you could imagine Tower of Power chiming in to.  It’s an entertaining number that you’ll find yourself repeating.  “A Crimson Gleam” is a wonderfully catchy mid-tempo rocker; a love songs of sort but written from a pessimist’s perspective.  What drives this song is a deliriously messy guitar lick that’s dark and lascivious; it gets inside your head and refuses to budge.


Tucker digs into bluesy soul for “Kickin’ Snow”, an image-filled expanse on futile frustration.  The guitar and organ-drive arrangement have a classic sound, but Tucker helps his cause with an emotive vocal line that alternates tension and resolution in masterful style.  Little turns of phrase ice the cake here, as Tucker completes one of the most finely crafted songs of the outing here.  “O Pain! Piano” has a bouncy melancholy feel that’s reminiscent of some of Billy Joel’s early work, but also involves some silly word play that lightens the mood.  Tucker is at his vocal best here.
Touches of Latin and soul help infuse “Amos And Boris” with uncanny warmth, which keeps the interest up in what is otherwise a fairly simple, straightforward and unremarkable number.  This is a great job of dressing up a song.  Tucker’s take on “If I Only Had A Brain” is ingenious, sounding more than a bit like Ray Charles.  There is life in the arrangement, meted out in swung rhythms and an inspired vocal line.  Tucker closes things out with “Whoa Daddy”, a cute and entertaining number that’s more afterthought than strong close.


Some might say that Elijah Tucker suffers something of a musical identity crisis on Saturn.  He changes styles and sounds so often on the album it might make your head spin.  The thing is, Tucker is bloody good at almost anything he touches.  There are a lot of post-genre acts out there who say that no style or sound is off the table, but few make the transitions in between as well as Elijah Tucker.  That being said, Saturn is a bit chaotic at times, but chaotic in the way a good party is:  running with a life of its own but never quite out of control.
Rating: 4 Stars (Out of 5)


Learn more at www.elijahtucker.com.
Posted by Wildy at 5:30 AM

Its quality music and musicians!