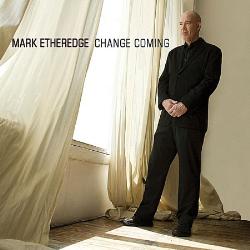 Mark Etheredge – Change Coming
2012, Vipaka Records
Mark Etheredge is one of a long line of computer software/programming professionals to harbor dreams of an alternate career in music.  Unlike many, Etheredge walked away from the safety and security of his nine-to-five into his dream, full-time gig writing, recording and performing music.  Etheredge’s debut album, Change Coming, plays with the smoothness of adult pop performers as Steely Dan, Boz Scaggs and Rodd Rundgren.  Etheredge sprinkles his twelve original songs with often witty lyrics as he explores real feelings, real people and real life.


Change Coming opens with “Living In The R.T.”, a song decrying the spread of modern technology and the digital lifestyle.  The song is catchy with a mild dose of funk in the baseline, although the vocals are too low in the mix.  Etheredge nails a 1970’s AM radio soul/pop sound here, and keeps it going for “Tuk Tuk Driver”, a catchy little number about falling in love.  The song is actually quite catchy in spite of some occasionally awkward lyrical constructs.  Diving into regret over a relationship he walked away from, Etheredge explores what might have been with “I Would”.  Etheredge struggles a bit with pitch as he takes his voice up an octave for the chorus.  The song is generally well-written, although the lyrical turns are a bit ill-kempt at times.
Innuendo and thinly veiled intentions are the order of the day on “Hot Tub”, all wrapped up in a deliciously catchy pop arrangement that blends jazz and soul into the mix.  Etheredge goes for humor here, missing the mark but skating along on the strength of the killer arrangement.  Etheredge aims for a second chance at love with an old flame, under the premise that this time she might be “The One”.  Even an impartial listener will be unmoved by the wishy-washy approach here.  Etheredge gets his mojo on for “The Other Man”, a slinky, funky number that tries to usurp the love who is already devoted elsewhere.  This is the best songwriting of the album thus far; hook driven and with a cogent lyrical flow.


“Pimp You Out For Love” starts out sounding like a compact rocker, but breaks into some serious pop/boogie for the chorus.  As good as the arrangement is, the lyrics take a rather pedestrian run at setting up a friend that eschews rhyme schemes and even poetic sense.  “Dear Buddy” is troubled relationship song written from a man to his cat.  Etheredge makes a vaguely subtle attempt to conceal the subject of the song at first, opting for a slow, sliding reveal that’s not without humor.  It’s a cute song that will hit home amongst cat lovers.  The straight-forward piano-driven adult pop arrangement is a good match.  “Room To Room” is full of pure singer/songwriter pastiche.  This portrait of a woman getting ready to downsize her home after forty years has the potential to be touching, but rather than expanding on the story Etheredge simply repeats it.  It’s all done to a solid piano arrangement with string a cello solo in the bridge, but the repetitive nature of the lyrics makes it a hard sell.
“Lessons” is a melancholy treatise on humanity’s tendency to have to learn the same lessons over and over again.  Etheredge gives an affecting performance this time around, sounding as if he’s singing from the heart.  The songwriting here is solid as well, from lyrics to arrangement and back.  “A Bit Of Kindness” exhorts the power of a being good to each other to make a better world.  Funk and jazz-infused pop make up the musical palette for the most vibrant and memorable song on the album.  “Change Coming” is a stiffly awkward pop declaration about rising above mediocrity.  The message is admirable, but Etheredge pairs it with a generic pop piano arrangement that is less than inspiring.


Mark Etheredge works the heart and humor strings on Change Coming, sometimes affecting sweet and/or funny moments, and sometimes tripping on awkward combinations.  The album is a solid introduction to an artist who is still learning his craft as a lyricist, but shows a surprising ability at crafting accessible and complete musical arrangements that seem ready for adult contemporary radio.  Change Coming bodes well for Etheridge’s future as a rock composer, and offers opportunities for poetic growth.
Rating:  3 Stars (Out of 5)

Thanks Wildy for featuring me and my music.